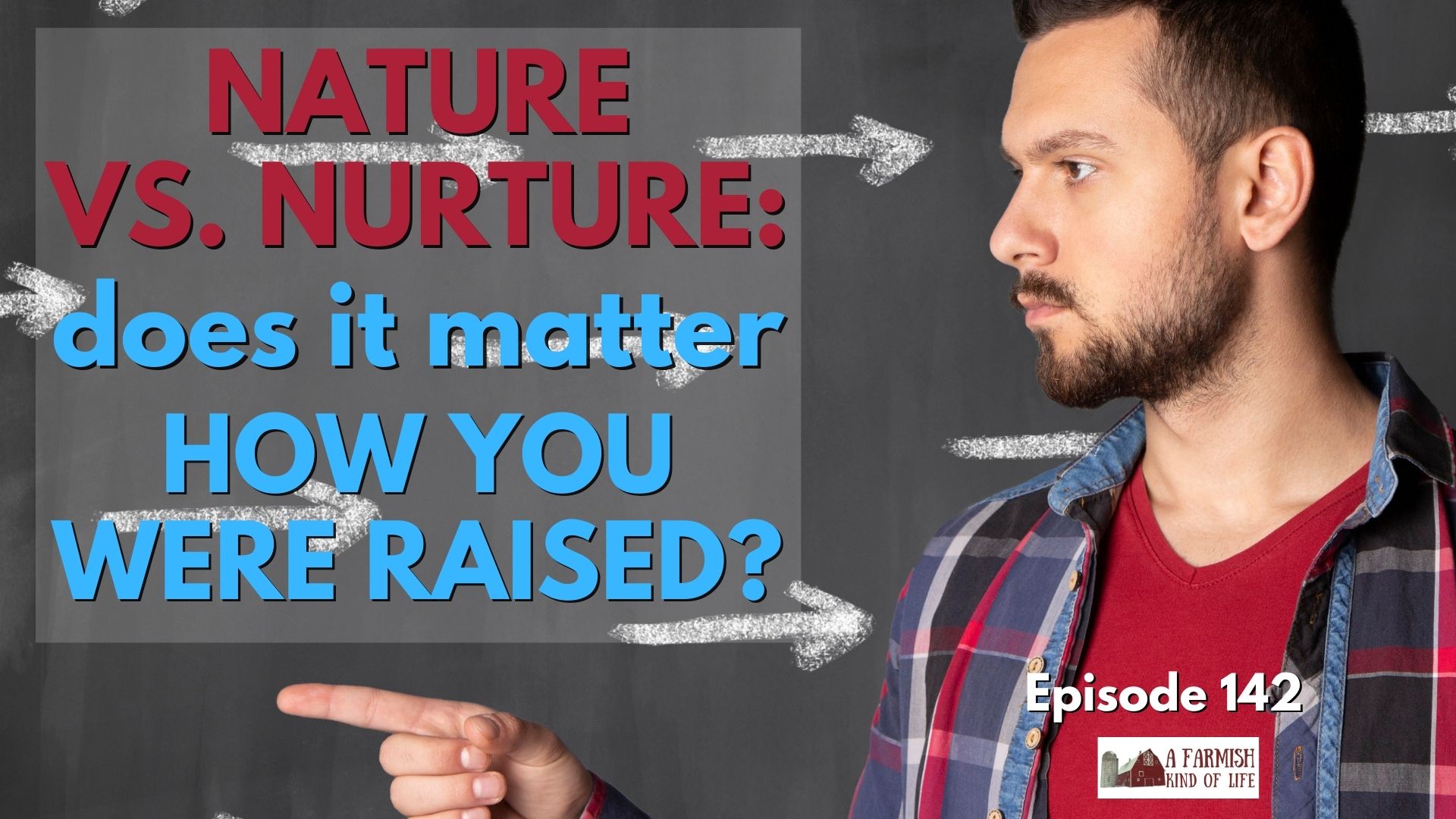 People have debated nature vs. nurture as long as they’ve been discussing “what came first, the chicken or the egg?”

Sometimes we look at how someone chooses to live their life or how they behave in a certain situation and we say, “well, that’s how they were raised.” And that can be because someone behaves responsibly or because they’re acting like a complete fool. We can also look at someone and think, “wow…that’s not how they were raised, why are they acting like that?”

This “that’s how (or not how) they were raised” has been on my mind the past couple weeks because of conversations I’ve been in and things I’ve seen online.

A couple days ago, a friend told me about a situation she had been in with her sibling. The sibling had made a recent family get together uncomfortable and dramatic due to some choices she’d made in her life and the ways she chose to talk about those choices. And as my friend told me about the situation, she kept saying, “But Amy, I don’t get it. That’s just not how she was raised.”

So I thought today I’d give you my thoughts on nature vs nurture, and is it really all about how you’re raised. I’ve got a way I think about this nature vs. nurture thing in my head, and the only way I’ve ever been able to explain these thoughts to other people is to use colors as an example.

Nature vs. Nurture: the color theory

My theory is this. When you’re born, you’re born a color. Let’s say purple. That’s the color you are and you will never be anything but a purple. That’s nature. Nurture comes in with the parents you have, the town you grown up in, the beliefs of your household, and that nurture determines what shade of purple you are: lavender, deep royal, neon, glittery, etc.

You may have a sibling raised in the same environment, but they were born an orange. So even though they’re living with the same parents, grew up in the same town, have the same beliefs in their household, they’re never going to be a purple like you. You might both end up glittery… but one of you will be purple and one will be orange.

That’s the way I’ve learned to look at the nature vs. nurture argument.

Nature vs. nurture: does parenting matter?

Some people might be okay with claiming that, especially if they are in a tough spot or have struggled a lot and they want to blame that on their parents and say “you are the reason I’m in this bind.” But let’s come at this with the approach of someone whose “life turned out right”: was it your parents that did that? They might have taught you those skills, they might have instilled a solid work ethic in you, they might have worked hard to bring you up in a “good home”. But were they the ones staying up late doing the homework or working the two jobs or butchering the pig? Nope, that was you.

I want to caution parents who want to tie too much of “this is what I put into my kid” to a perfectly balanced equation of “this is how my kid turns out”. I wrote a blog post about this several years ago for my homeschooling blog. It touched on nature vs. nurture, and explores the uncomfortable situation of parents caring how their kids act mostly because of how it makes the parents appear to other parents. I invite you to check it out: Parents, Cut The Cord. It’s Not About You.

How does this all relate to us dealing with other people as adults?

Here is my honest opinion about this “that’s how they were raised” thing: I think we should do our best to be a good example for the others in our life. Having said that…

As people in the active stages of parenting, “it’s how they are raised” is something to worry about or gloat about. But as adults in the real world? I feel like “that’s how they were raised” is a cop-out. It’s an excuse. And in some instances, it’s simply a holier-than-thou statement.

If you’re going to use “it’s how they were raised” as the definition for why people are the way they are, you have to accept that same definition for yourself. And I don’t know about you, but I’d like to believe that I’ve actually had something to do with choices I’ve made in my life and the direction I went. And if you’re going to go with that, you have to understand that means ALLLLL the choices. You don’t get to take the credit for the good things you did and then say someone else was responsible for the bad choices.

And I think that’s part of the reason that this nature vs. nature thing becomes such an issue. We want to use “how I was raised” when it benefits us in some way: whether that’s “I’m pretty awesome” or “feel sorry for me”. But if we go with nature, then we have to suddenly become really responsible for the choices we’ve made and the direction we’ve gone.

Every person experiences things in their life that help to shape who they are.

There are people who were raised in some pretty crappy situations. And I’m not discrediting that. But holding on to the crap you were raised in means the crap wins and you don’t get to make the most of the life you were given.

Similarly, if you were raised in money but now you don’t have two pennies to rub together and you’re barely scraping by, stop lamenting over the life you were raised in and pay attention to what’s happening in front of your face.

Because at some point, it doesn’t matter how you were raised. It matters what you’re doing now.

At some point, I don’t care how you were raised. I care what you’re doing now.

Nature vs. nurture? Maybe it’s both.

I don’t think the answer is nature or nurture. Maybe it’s both. I won’t deny that the way you’re raised contributes to your bucket of beliefs and your approach to life. But in the end, it all comes down to you. Your choices. If someone is a jerk, it’s because they choose to be a jerk, regardless of whether they were raised to be a jerk or not, and regardless of whether or not their life circumstances say they have the “right” to be a jerk.

If someone is pleasant to other people, it’s because they’re choosing to do that, not necessarily because they were raised to be pleasant.

If someone is responsible and follows through, it’s because they are choosing to do that, regardless if that’s a continuation of what they were taught to do or a step away from the life they were raised in. It’s a choice.

If someone spends their money on organic pork or cheap beer or tattoos or drugs or gives it all away to charity, that’s a choice they’ve made.

I think it’s important for us to pour as much good as we can into the people in our lives, whether that’s the kids we are raising or simply other people around us. But we have to realize that we can offer an entire toolshed of things like responsibility, kindness, good behavior, etc, to the people we’re influencing, and they can close the door on that toolshed and walk the other way.

Who are you right now? Who are you choosing to be? It is hard work to make good choices, and we have to make those choices every single day.

I think in any situation, you are who you are because of who you choose to be. It’s up to you. The question is, can we handle that level of responsibility?

Share this...
Filed Under: Itty Bitty Thoughts, Podcast
141: The secret to personal growth
143: Normal life in the real world