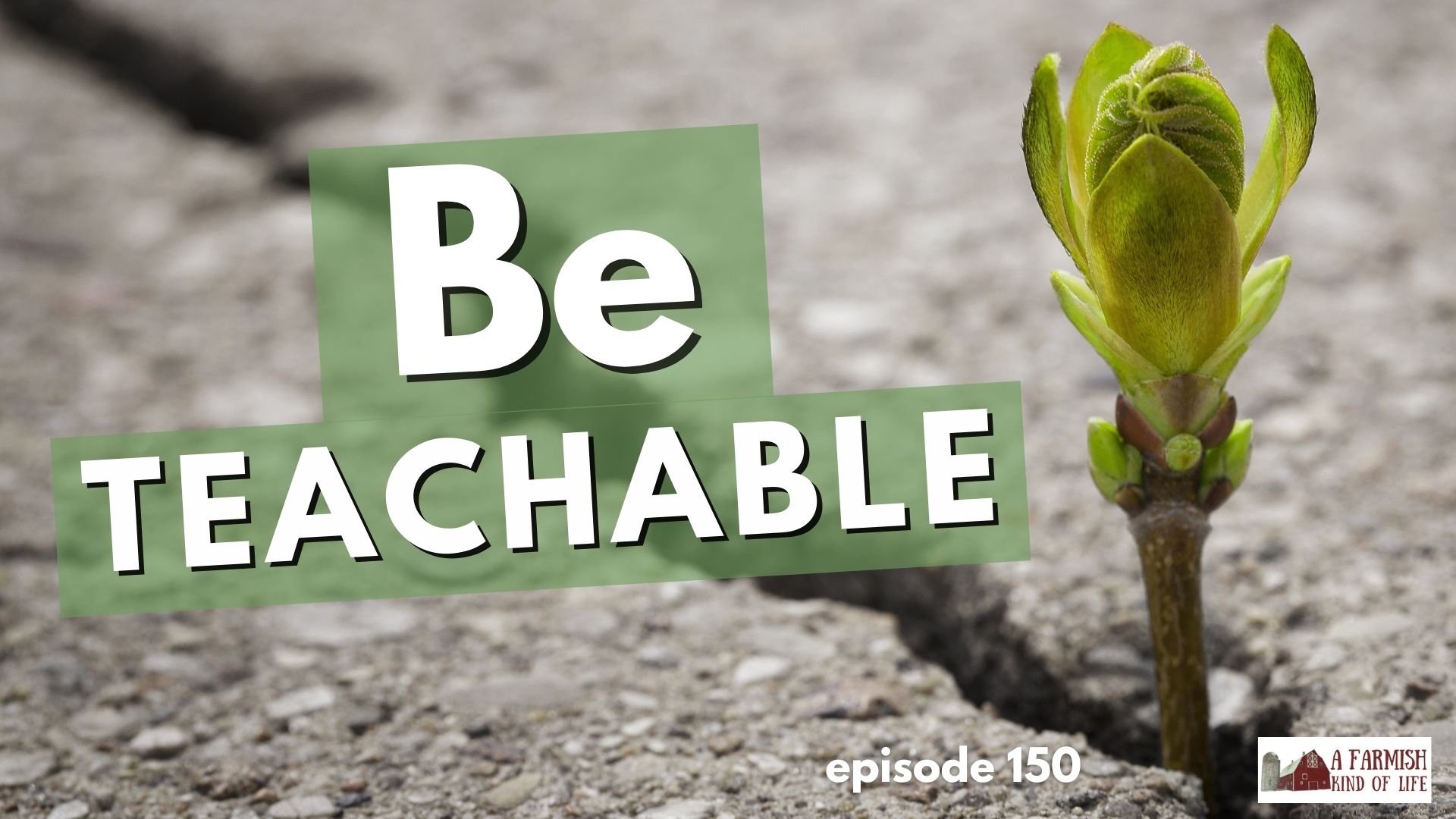 That’s what I thought as a kid. And I bet that’s what lots of little kids think. As it turns out though, now that I’m firmly implanted into adulthood, I realize that life is a constant state of learning. There is nothing magical that happens when you turn 18 or 30 or 41 that allows you to acquire all there is to know. There is always something new to learn whether that’s a skill or a piece of information or a new experience or a change of opinion. Learning happens until we die.

But I think the concept of being teachable is worth talking about because I see a lot of adults who are unteachable. We think of learning as something kids do (because, school) and we don’t really think of it as adults unless we suddenly find ourselves in a career change. Maybe we have the belief that children are naturally teachable and it’s something we grow out of. Whatever the case, I think it’s worth spending some time considering why it’s important to be teachable and how that can benefit your life and the lives of those around you.

Being teachable means you need to…

You have to want to learn a thing (or desire the outcome of having learned a thing) to really be able to learn a thing. If I wanted to learn algebra, I probably would have caught on to algebra better and would still remember how to do it now. Compare that to writing, which I live and breath, and I’ll learn it, remember it, and want to learn more.

Some folks will say, “I don’t agree because I didn’t really want to learn all the aspects of my job, but I did it anyway.” To that I would say the job provided you with income—that’s what you wanted—and so you learned the skills necessary to make that income. Which is kind of like me kind of sorta learning algebra because I wanted to graduate. But if someone said to you, “here are these four tasks you need to learn” and you had no interest and there was no payoff to you learning the skill, you’d probably tell them to go pound sand.

Kind of like if someone told me I needed to take a calculus or trigonometry class tomorrow.

2. Be willing to learn

You can “want” to learn something but be unwilling to do the things it requires to learn the thing. Desire does not equal effort. Wanting to learn to play guitar without putting in the work is a losing game. It’s like wanting to learn to cook a fancy dinner but refusing to go to the store to buy the ingredients for the meal. You can want something all you want, but it’s not going to happen without your effort.

Being willing to learn doesn’t just refer to learning a new skill or a new piece of information. It also refers to being willing to see the other side of things. There are a lot of people today who say they want to be open-minded and they’re willing to hear out someone else’s opinion. Survey says… that’s a lie.

Committing to learning something requires a bit of humility right off the bat because you have to admit that you don’t already know whatever it is you’re trying to learn. This sometimes means accepting that someone younger or less “whatever” might be able to teach you. To really be able to learn something, you just might have to struggle, be uncomfortable, look stupid, and ask questions—and all of that means humbling yourself a bit. Or a lot.

Another way to think about practicing humility is that you have to be willing to let other people be of service to you. And that can seem counter-intuitive because having some serve you means they have to humble themselves before you. But I’m not talking about a king and a servant here. King and servant is a situation where the king could do the thing but he doesn’t want to do the thing so he’s making the servant do the thing. I’m talking about the people who could learn something from someone else, but they don’t want to ask. They don’t want to admit they don’t know something or aren’t good at something or could do better at something so pride keeps them from asking and they keep walking along a path of I can do all the things just fine. Being willing to have someone else serve you really means being willing to have someone help you, and that requires humbling yourself to be able to admit you need the help they can give.

In becoming teachable, you might learn things about yourself.

Are you a good student?

There’s something to be said for having a good teacher, but a good educational set up requires a good student as well. I grew up with firearms and knew a lot about shotguns when I got married, but hand guns? Not so much. All of that I learned from my husband.

In learning about firearms from my husband (which could have been a dicey situation, as many people say it’s hard to teach/learn from a spouse) I had to take instruction which meant being willing to accept hearing that I was doing something wrong—and not being a snag about it. Granted, there are more productive ways than others to tell someone they need to modify what they are doing, but you also need to be the kind of student who can handle being told that something needs to be modified. Or unlearned. Or practiced. Or stopped.

Are you only pleasant when you’re in control of the situation and you know what’s going on?

I don’t want to say I’m a complete control freak, but I do like to have some sort of idea what’s going on. I don’t want to say that I’m unpleasant if I’m not in control of a situation, but too many unknowns and too much struggle without success definitely brings out a different side of Amy.

What kind of a learner are you?

I’m not just talking about your learning style as it relates to auditory, visual, or hands on.

Are you a grab-on-and-go kind of person, or do you need to know what to expect? My eldest was teaching me about a particular maneuver on the motorcycle and was going to explain it to me step-by-step as I did it, but I wanted a verbal walkthrough before I tried it.

I’m also one of those people who, especially if learning something where a mistake could result in something that can’t be undone, my first request is always, “just tell me how to stop” or “just tell me what to do if something goes wrong”. As it turns out, there are some learners out there who approach the same situation with, “meh, I’ll figure it out when I get there. What’s the worst that could happen?”

Being teachable helps others

Admitting that you are learning something or that you don’t know everything is helpful to other people. The more normal we make it to be in a constant state of learning, the more learning will happen—for everyone, hopefully.

When we moved to our homestead back in 2011, we were learning as we go. The great thing about that was our kids learned mom and dad don’t know everything and that when they encounter something they don’t understand how to do, they have to learn how to do it. Mom and Dad had to enlist the help of other people (whether in person or online) in order to move forward.

If you’re not teachable…

If you’re not teachable, eventually you won’t find people who are willing to teach you. Have you ever tried to teach someone who just didn’t want to listen? Or wasn’t willing to put in the work? Or had such an attitude you wondered why they were even bothering to learn the thing? Maybe it was a kid, maybe a relative, maybe someone at work. If you’ve dealt with someone who isn’t teachable, you know how frustrating that can be. You don’t want to waste your time, right?

Why waste the gift of life you’ve been given? Why not make full use of your dash? Keep learning. Keep doing more. Teach others what you know, but remember to be teachable yourself.

Share this...
Filed Under: Itty Bitty Thoughts, Lifestyle Design, Podcast
149: The Importance of Unlearning
151: The REAL reason to take care of your yourself