After several years of raising Cornish Cross chickens as our meat birds, we decided it was time to compare them to another meat bird we’d been hearing a lot about: Red Rangers. So we did an experiment. I bet you’re here because you want to know who won the mighty battle between Cornish Cross vs. Red Rangers at our farm.

Note: this is simply one farmgirl’s experience regarding two breeds of meat birds. Your experience may be different. If you’d like further thoughts on choosing a meat bird, check out my ebook Choosing the Best Meat Chicken for Your Homestead.

Cornish Cross vs. Red Rangers: the actual purpose of our experiment

The original purpose of our experiment was to see if the Red Rangers would:

a) work decently as a meat bird, in which case we would…

b) save a rooster and several hens to provide us with fertile eggs, which we would…

It would be a closed system! We would no longer have to buy Cornish Cross chicks every year! Our plan could not fail! 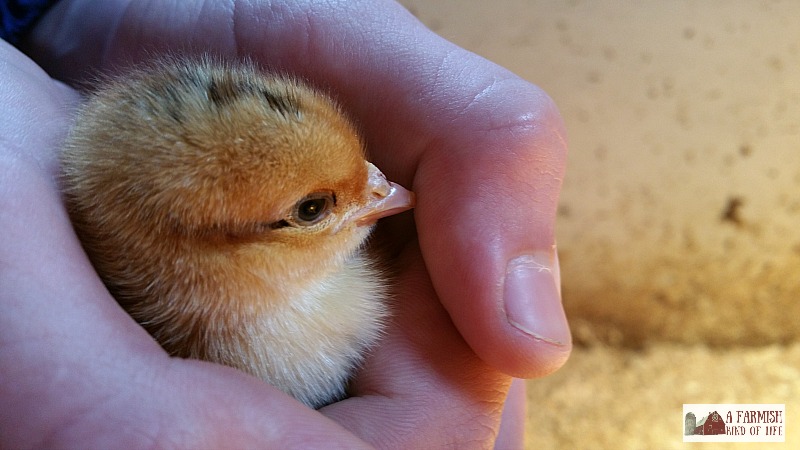 In my excitement, however, I failed to see something that seems rather obvious now: if it was such a perfect plan, why wasn’t everyone doing it?

Our dream to keep some Red Rangers, collect their eggs, incubate them, and hatch them out so we could have a closed system for meat birds quickly crashed and burned when someone hinted to us a wee bit into our experiment that Red Rangers don’t “breed true”. Meaning that even if a mommy and a daddy Red Ranger love each other very much, their babies aren’t necessarily going to have the traits of Red Rangers that we would be looking for.

Well, then. Must have missed that little nugget in my original research.

Cornish Cross vs Red Rangers: the plan…and how it failed.

Now knowing that the Reds didn’t breed true, and being fully aware that the Reds grew slower than the Cornish Cross, our plan was to keep all the meat chickens for 9 weeks and butcher them all at the same time.

We knew the Cornish would be on the larger end of things and the Reds would be a little smaller than they could have been, but we didn’t want to set up another butcher day—we already had 3 big butcher events planned at our farm for the year!  By butchering both the Cornish and the Reds at 9 weeks, we knew we we’d be looking at something “a little” smaller with the Reds. 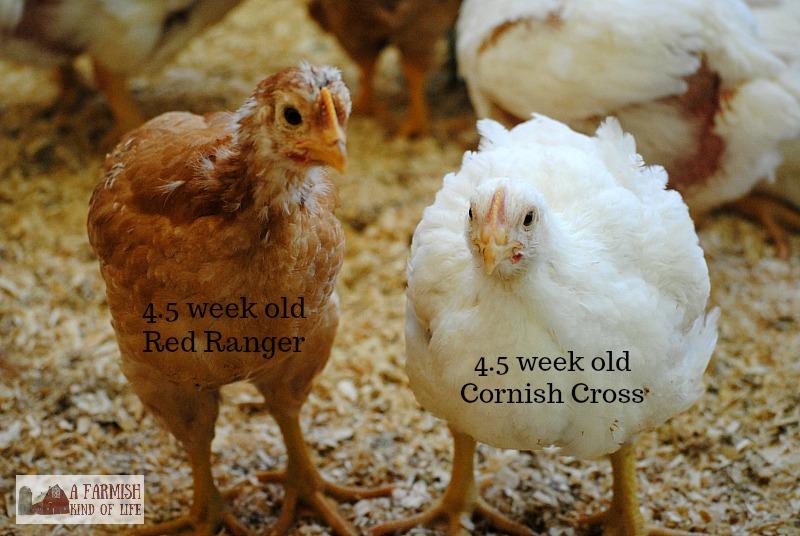 Over the weekend that our meat birds reached 8 weeks old, we had our first Cornish Cross die—as well as another Red Ranger (the 4th since we’d started the experiment). As is our usual practice when a chicken dies from an unknown cause, we decided to breast the chickens out for our dog.

Below is the comparison of breast meat from two 8 week old birds – Red Ranger on the left, Cornish X on the right. 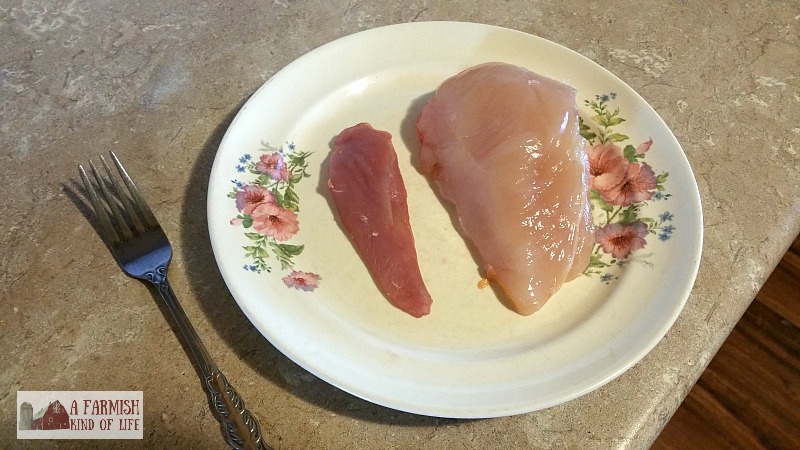 I called my husband over and said “So, then. Butchering these Reds at 9 weeks is pretty pointless.”

When Cornish Cross butcher day arrived, however, we did butcher the largest Red Ranger rooster. I wanted another comparison—this time a full bird.

I mean, the chicken breast comparison a week earlier had to be a fluke, right?

So, let’s discuss how much these chickens eat while we punt through this experiment some more, yes?

Cornish Cross vs. Red Rangers: how much do they eat?

I raised our Cornish Cross and Red Rangers together so obviously they were all eating the same food at the same time. (They also shared their coop with 9 turkey friends!)

We feed twice a day; once in the morning and once at night. Since our experiment wasn’t intended to figure out who ate what food, I don’t have an exact division of numbers.

But I’ve got a pretty solid idea, and you can take my observations for what it’s worth.

What I can tell you is that the Rangers did not eat noticeably less than the Cornish.

They were all—both Cornish Cross and Red Rangers—at the feeders, ready to knock down the feed lady (me) when she came in.

They all—both Cornish Cross and Red Rangers—stuffed their faces into the feeder and gobbled until all the feed was gone.

There was never feed left sitting. Nor was there ever a cluster of Reds in the corner with their pinkies up saying, “look at those uncivilized Cornish Cross birds! I do declare, they’re going to eat themselves into a food coma!”

No, the Red Rangers were right in there with the Cornish Cross, eating until the food. was. gone.

Since we decided to delay the butchering of the Red Rangers due to their small size, I wondered: when the Cornish Cross birds are gone, how much food will we be going through? It is common to hear that Red Rangers eat less than Cornish Cross.

Since the Cornish Cross had made up more than half of our flock, would our feed usage after the Cornish Cross were butchered drop by the same percent as the amount of birds that had been butchered? Or would it drop by a more drastic amount? 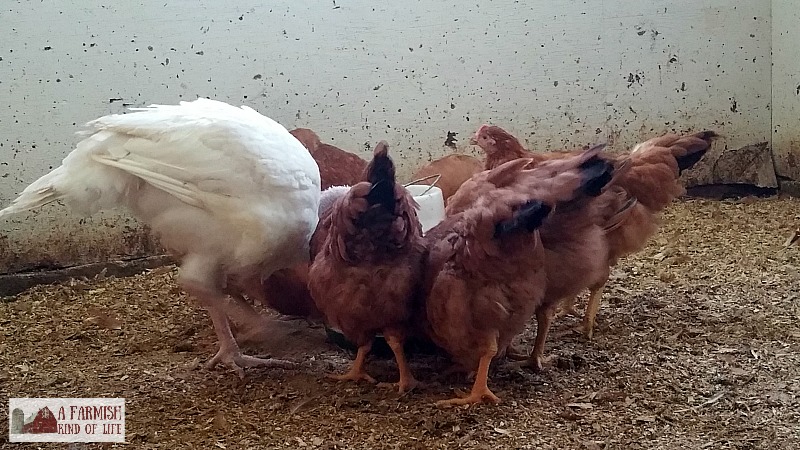 If it didn’t drop by a noticeable amount, that would seem to mean the Red Rangers (and 9 turkeys) had been eating just as much as the Cornish Cross had.

Which would mean that Red Rangers eat the same—or close to the same—amount as Cornish Cross for a longer amount of time, which results in a finished bird that is comparatively…what size?

(See our actual Cornish Cross vs. Red Rangers chicken butchering results further down in this post!)

I’ve been asked a few times about whether or not we free range our meat birds.

In the past, we had a couple batches of Cornish Cross birds we that free ranged. We are currently not free ranging any of our animals because of an increase of predators in the area—mostly wandering dogs. So I have no experience to share with you regarding how well these Red Rangers did at foraging and free ranging.

What I can tell you is that when our Cornish Cross were free ranging, they took much longer to grow out—which coincidentally is what I’ve also heard from several folks regarding Red Rangers. It makes sense. When you’re free ranging, you’re finding your own food—but you’re also using way more energy (burning more calories) finding that food.

So, yes—meat birds can be great at free ranging. Also, yes—if they’re free ranging, they might grow more slowly.

Take that for what it’s worth.

Cornish Cross vs. Red Rangers: what about leg issues?

I am no stranger to leg issues in chickens. We’ve raised Cornish Cross since 2012 so I know what happens when Cornish Cross birds get too much food and grow too fast. One of the great things about Red Rangers is they supposedly they don’t get the same kind of leg issues.

Apparently, someone didn’t inform my particular batch of Red Rangers.

I had 4 Red Rangers (of 35) go down with leg issues in the first 8 weeks. How many Cornish Cross?

Note: We have determined that really good feed management is super important in the Cornish Cross. Our first year with them, we basically fed them when they looked hungry.

(Which, if you’ve ever had a Cornish Cross, you know that means every single time you look at them.)

We’ve learned a lot in the last several years. This year we really watched how much food they got, and had a much better experience both with their mortality rate and their activity level. They were still trying to fly to see the feed lady (me) right up until butcher day.

Please don’t send me hate mail. I’m just calling it as I saw it in my barn.

(Listed cost to raise did not include poultry shrink bags, bedding, electric for heat lamps, or my time.)

Largest bird: 7 lbs (This was one very odd, much larger bird. Besides that bird, 5 lbs was largest.)

Amount of feed used per bird: From our observations, we assumed the Red Rangers continued to eat the same rate of food that the Cornish had. It may have been slightly less (with the 9 turkeys making up the difference), but who is to say it wasn’t slightly more? (Some folks have argued that Rangers sometimes actually eat more than Cornish because Rangers are generally more active than Cornish.)

Remember, our original purpose for doing the Cornish Cross vs. Red Rangers experiment had nothing to do with how much it cost to feed Red Rangers—all we were concerned about was getting to the point of incubating. When we realized there would be no incubating, we (unfortunately) stopped tracking the bird specific feed usage.

So you are welcome take these numbers with a grain of salt — but not too much. I know how many bags of feed were empty in our barn. We are counting 22 pounds of feed per bird to finish off a Red Ranger for 20 weeks.

(Listed cost to raise did not poultry shrink bags, bedding, electric for heat lamps, or my time.)

Obvious question: Would the cost to raise have been less if we wouldn’t have waited until 20 weeks—turkey butcher day—to butcher the Red Rangers? Perhaps. We could have butchered at 12 or 16 weeks. But would we have still ended up with Red Rangers having an average weight of 4.5 pounds? Or would they have been smaller?

Y’all. Basically, I raised birds for five months that averaged 4.5 pounds each. My Cornish Cross were a 1/2 pound short of that in 9 weeks of decent food rations.

(And the Cornish Cross get there even quicker if you’re a crazy person and feed them whenever they look hungry. People. Please stop doing that.)

From the numbers above, you can see that in our particular experiment, it cost twice the amount to raise the Red Rangers for a bird that was only a half pound bigger in size.

Every farm(ish) family has to make their own decision…and here is ours:

It was nice to have the Cornish Cross vs. Red Rangers experience, but we’ve decided we won’t be raising Red Rangers as our meat bird again. We’re choosing to stick with Cornish Cross—especially after having an exceptionally great experience with them this time.

I’m telling you — proper care and feeding is key to not raising a Cornish Cross that looks all Franken Chickenish and can’t walk after it’s a month old.

It is possible to raise a happy Cornish Cross who can actually fly right up until butcher day. I know it is.

Because I did it.

I have more thoughts specific to the Red Ranger—how do they taste? Were they hard to butcher? What’s with their skin? Tell me all the things!— at Red Rangers: 7 Reasons We Won’t Raise Them Again. Check it out. And if you’ve got more questions, let me know in the comments!