We Don’t Use Chick Starter: Three Reasons Why

In true rebel farm(ish) girl style, I thought I should let you in on a little secret: We don’t use chick starter at our farm and we haven’t for years.

Here are our reasons…

Reasons we don’t use chick starter: the guy at the feed store told us we didn’t need to.

This journey started several years ago. We went to the feed store to grab a few bags of chick starter, but the feed store was low on supply. A gent who worked at the store pulled me aside and said, “You know, you don’t actually have to use starter.”

My heart rate elevated. Here this dude was telling me something different than what I’d read in all the blogs and books I’d used for solid research. How dare he? I filed his advice in my brain…and kept buying starter.

But then I started talking to more people.

Research online doesn’t give any easy answers about when the practice of feeding chick “starter” began, but I can tell you that the more long time farmers/homesteaders I talk to, the more I get the impression that a good majority of them regard chick starter as more of a “thing” than a nutritional requirement.

It seems to me that as time goes on and research is done, the proper care and feeding of chickens becomes more complicated instead of less so. While working on this piece, I came across several articles that stated chicks should not eat layer food, layers should not eat chick food, and rooster companions to egg-laying hens should be eating a completely different feed of their own.

In a real-life, multi-age, free range flock—the kind we think of when we picture Normal Rockwell-esque farms—I’m not sure how this segregated feeding is even possible.

All I'm saying is that I'm pretty sure Ma Ingalls wasn't sending Pa to the store for different kinds of feed. Click To Tweet

Reasons we don’t use chick starter: when chicks follow Mama Hen around, they eat what she eats.

When our chickens were free range, we would often have a lot of surprise hatches. I did not (and still don’t) separate mama and her babies from the rest of the flock – 99% of the time we’ve seen mama prove she can hold her own. Those little fluffballs follow mama wherever she goes, doing what she does, and eating what she eats.

As it turns out, I’m not the only one…

A survey of fellow homesteaders revealed there are many farmish folk who don’t use starter.

One homesteader commented their local feed store doesn’t carry non-medicated starter, so they just opt not to use starter at all.

Another homesteader said she simply doesn’t have the room to store several different kinds of feed, and so her whole flock gets the same kind.

Yet another homesteader commented that the protein difference in the starter and layer crumbles available in her area is a “whopping” 1%, so she figured it was easier to buy the layer feed for everyone and be done.

If you don’t use chick starter…

Some people don’t use chick starter, and worry about the size of the crumbles in adult chicken feed. There is a solution for that! You can grind the adult feed for the chicks using a coffee grinder. (Just make sure you use that grinder only for feed!)

For instance, the game bird grower we buy for our pheasants is pretty large, so we will grind it for the babies for a couple weeks.

Some people argue that you don’t even have to do this, and that the chicks will be just fine pecking at the large crumbles. 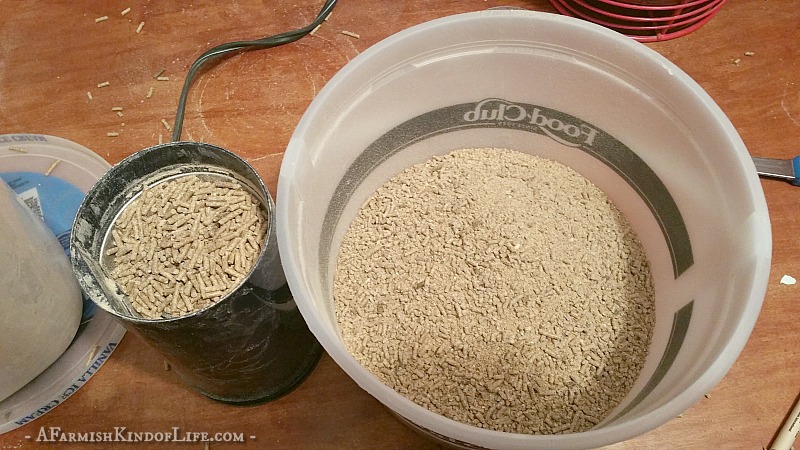 If you don’t use chick starter and you’re worried about lower protein by not feeding a chick starter, realize there are many ways you can supplement protein. Try scrambled eggs, meal worms, and other things as a protein boost for all the birds in your flock.

Some folks say that the issue with chicks eating layer feed isn’t the lower protein, it’s actually that the calcium content is too high for chicks to process.

Layer feed can have as much as 3% more calcium than its starter equivalent. A laying hen uses that extra calcium to create strong egg shells. If higher levels of calcium are given to chickens who aren’t laying, some sources suggest it could cause stress as their kidneys work to filter the calcium out. Do with this information what you will.

To suggest that chicks are prone to kidney failure because they get too much calcium suggests I would see chicks keeling over from kidney failure, or growing up to mope around my farm with debilitating health issues.

I haven’t seen it yet, folks.

Take that as you wish.

Share this...
Filed Under: Animals, Podcast
Tags: Poultry
The Only Way a Garden Saves Money
Can you Open the Incubator During Lockdown?

45 thoughts on “We Don’t Use Chick Starter: Three Reasons Why”