106: If I May Speak Freely: Freedom of Speech 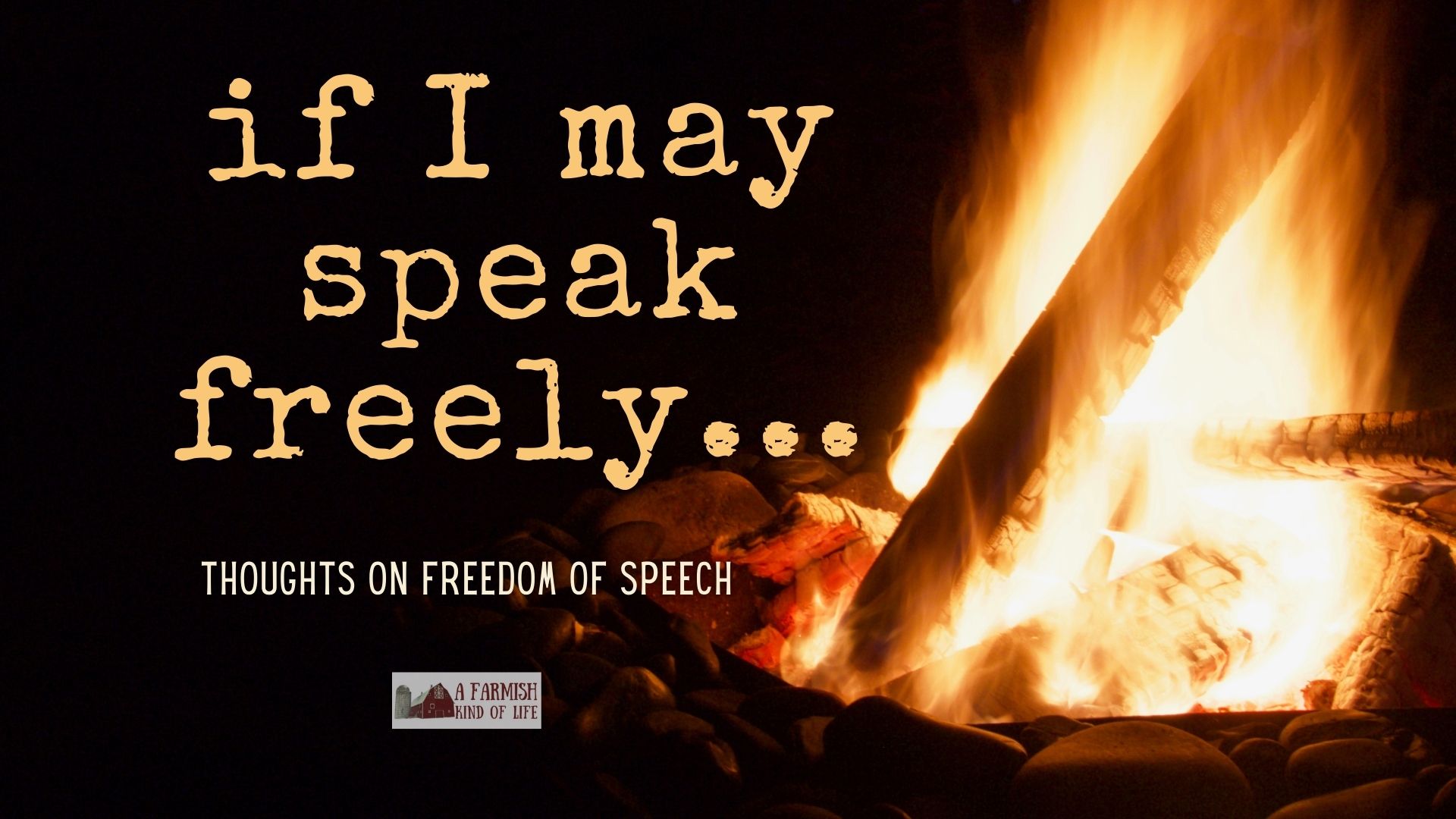 Today we are tackling the topic of freedom of speech—it’s a huge topic that’s been on my mind lately because of things happening out in the world. Not just because I see certain things being censored online, it’s also how I’m seeing people react to that. So today we’re digging into this topic and giving you some ways to look at freedom of speech as we move forward.

Listen to the podcast episode by pressing the play button on the black bar above.

All episodes are linked under the podcast tab that you can find way at the top of this post in my menu bar.

Let’s start with a metaphor.

Let’s pretend that I invite all of you to a campfire at my farm, and I say it’s a happy wonderful place where anyone is welcome for conversation and friendship.

And everyone starts having conversations.

And then I happen hear you talking about church, or being a vegan, or cops, or your brother and his boyfriend getting married, or being pro-life or pro-choice, and every time you open your mouth, I talk over you.

Or I move you away from the campfire where no one can hear you.

Friends, this is no longer a campfire where anyone is welcome for conversation and friendship.

And this, my friends, is what social media is turning into.

Now, if I don’t want certain things talked about at my campfire, that’s my right because it’s my farm. But I can’t go around telling people that my campfire is a happy wonderful place where anyone is welcome for conversation and friendship if I’m also going to tell people what they can and can’t talk about.

Free speech: what does it actually mean?

The crazy thing is that we’ve got a lot of people saying they believe in free speech. We’ve got people super angry that some of these campfires (or social media) are censoring people, mostly themselves.

But at the same time, they get angry when someone at a campfire starts blasting off an opinion they don’t like. They usually end up asking the person who has the campfire to tell that person to leave because, “you can’t say that here!”

Free speech means it’s okay to have an opinion and it’s okay to voice that opinion — even if someone doesn’t agree with you. It would be super cool if this actually meant voicing that opinion in a respectful manner, but let’s be real. This is America and we are humans and most people start frothing at the mouth about the rightness of what they believe.

The thing about free speech

Here’s a really cool thing about free speech. If you’re sitting at the campfire with someone who is spouting off opinions that you don’t agree with, and you think they have crossed the line into jerk territory—you can pick up your chair.

You can move your seat at the campfire.

I don’t think that free speech was ever supposed to mean threatening to bash peoples’ skulls in. I think it was more supposed to have to do with when we don’t like something the government is doing, we can go ahead and express that. In any event, go ahead and say the super tough and super cool things you want to say—because then I get to decide how I interact with you after that.

It’s really a win-win for both of us.

Freedom of speech is hard.

People are figuring out that freedom of speech is actually difficult to sit nicely with. Because if it’s okay that I say what I want, it’s okay that you say what you want. And that’s really easy if we agree with each other. And it’s even pretty ok if we agree to disagree with other. But when we flat out disagree on something that we believe so hard core in the pit of our very stomachs, for most people, it’s really hard to contemplate freedom of speech in all of that.

In real life, most people have a really hard time if someone strongly believes a certain thing that totally goes against what you believe in. But if you actually believe in freedom of speech, you have to allow them the opportunity to speak their mind.

Even if you don’t agree with them.

How does that feel?

Quotes about freedom of speech

Everyone is in favor of free speech. Hardly a day passes without its being extolled, but some people’s idea of it is that they are free to say what they like, but if anyone else says anything back, that is an outrage. ― Winston Churchill

What is freedom of expression? Without the freedom to offend, it ceases to exist. – Salman Rushdie

If liberty means anything at all, it means the right to tell people what they do not want to hear. – George Orwell

Free speech is not speech you agree with, uttered by someone you admire. It’s speech that you find stupid, selfish, dangerous, uninformed or threatening, spoken and sponsored by someone you despise, fear or ridicule. –  Robert J. Samuelson

What exactly is happening with freedom of speech right now?

There are exceptions to freedom of speech. For instance, we don’t allow fighting words, true incitement, or threats. We don’t allow child pornography. We don’t allow things that are just blatantly obscene. Slander, libel, and false advertising isn’t allowed.

Freedom of speech really means the right to express opinion without government restraint. And what that means for most people right now is being able to say “I’m pro choice” or “I think this person should be the president” and then they are free to discuss or argue about it.

But here’s the thing.

We’ve got this strange, way too common thing happening now where you post an article on Facebook that might have something to do with let’s say…alternative medicine or some non-mainstream treatment for something—and it gets removed.

That’s treading on dangerous territory when it comes to freedom of speech.

I had a friend who was talking about censorship and related it to something in history with Hitler and his Facebook account was partially locked down for 30 days.

I had a friend locked out of their Facebook account because they posted the definition of facism.

Now let’s be clear. Facebook can do what they want. If Facebook wants to say we are removing all posts that have to do with XYZ, that’s absolutely their right. But they need to be clear and across the board about what they do and don’t allow.

And if those are things you feel like you should be able to post about and interact with, what should you do?

Move your chair at the campfire.

So where do we go from here?

So what’s the point here? Is it just to complain about freedom of speech?

No—it’s to talk about what our responsibility is with it. Here are four points to keep in mind as you move forward in the future.

I think it’s great that people show their true colors and let us all know what they believe. I don’t want that censored. When people show who they really are (whether I agree with them or not) it’s so much easier for me to figure out who I really want to surround myself with.

Second, encourage free speech as much as you’re able. Understand, however, that this requires we learn how to have a conversation again with people who have a different perspective on life. Which also requires that we understand the difference between a productive conversation and a screaming match where no one is listening.

Third, understand the appropriate response for speech you don’t agree with. Move your chair. You don’t like what the shop owner is or isn’t supporting? Go somewhere else. You don’t like what the social media you’re on is allowing or not allowing to be said? Find a different way to communicate with people. You have that option. Don’t get up in the drama and the anger and proving you’re right or trying to make a point. If you don’t like it, move your chair. You’re in control how you interact with someone once they make their intentions or opinions or beliefs known.

And just for clairification, I am not at all suggesting that you should only surround yourself with people who agree with you. I actually think that’s a horrible way to live your life! But it does mean, be conscious of who surrounds you. Other opinions and perspectives are beautiful. But I prefer not to get them from overly dramatic, anger filled people who are always on edge and just want to make their point.

Four, use your brain. Freedom of speech often means we are passing around information that supports our opinion. When someone tells you something, I want you to use the big beautiful brain you were given. Ask yourself, where did this info come from? Why are they telling me this? Does this make sense?

Do not discredit something just because it comes from “the other side”. Don’t believe something just because it comes from “your side”. That creates mob mentality and it makes people stop thinking. We need people to think—especially now. We need people to engage their brains, and to be willing to question what’s coming at them.

If I post something and you have different information, by all means, send it to me. I’m open to conversation. But I am telling you this. If you send me a link to refute what I’ve said, and you haven’t even opened the link to read it yourself (i.e.,you’re just going off the headline) or you can’t explain to me what that article is saying when I ask you about it, you’re not helping your cause.

Read the stuff you’re sharing. Research stuff before you point it out. I’ve seen people on both sides passing around articles that I want to say “have you read the article you’re passing around? Because first of all, it sounds like a six year old wrote it. Secondly, the headline absolutely does NOT match the information that’s in the article…”

Four and a half, another way to use your brain… When it comes to standing up for what you believe in, don’t do “stupid things in stupid places with stupid people”. Listen, I get that you want to show support for a certain belief or cause, but going up against groups of people who are known to be violent or where there is the slightest possibility of violence is a really bad idea. And that potential for violence doesn’t even have to come from the disagreeing sides, it can just come from punks who take advantage of the fact there is a crowd.

Be realistic about what’s going on right now. Use your brain.

Freedom of speech is one of the things that makes us…us. Let’s understand what it really is and know how to best use it to pull our country together, instead of driving a wedge further between everyone who disagrees.

Signup for my email newsletter: http://www.subscribepage.com/q6n3t5

Filed Under: Homesteading, Podcast
105: Build the Life You Want by Saying No
107: Deep Thoughts from the Woods