The Handwritten Letter: 4 Reasons We Need to Bring it Back

Someone give me a pen and a paper. I’m gonna sit down and write a handwritten letter.

(Well, I mean, after I finish this blog post.)

When I was younger, I had many pen pals. Even as an adult—before Facebook’s popularity—I found a pen pal through an old fashioned living/homesteader forum. And though she and I are now friends on Facebook, we do the vast majority of our communication by way of a handwritten note, letter, or card.

The majority of people I’ve asked say they love to receive handwritten letters or cards in the mail. It lets them know someone is thinking about them because they put the effort in to sending them something special.

Time. You know, that thing we were supposed to be saving with all the technology and advancements we add to our lives? (That’s a whole different blog post, though, so…)

Our communication now may be faster and more efficient, but is it actually better? Is it to be considered an improvement that we can blast off a paragraph’s worth of response in less than 15 seconds?

In some ways, maybe. But I’d argue that it’s not better in all ways or every situation.

See, the thing I’ve realized is this: regardless of the reason for the death of the handwritten letter, the quality of our communication has changed because of it. And this is much deeper than what it first seems at face value.

A handwritten letter requires time to write each word.

I sat down to write a letter to a friend last week and was amazed at how much longer it takes to w-r-i-t-e out the very same words than if I were to type them out on Facebook. Do I want to write that paragraph about what the chickens/my kids/the neighbor did yesterday? Do I want to write out what I think of my friend’s sister’s boyfriend? Or should I leave it out? What’s really important or pertinent to this note? And how long will my 40-year-old hands and fingers hold out to continue this pen-and-paper letter?

Which got me to thinking—if people had to hand write all their emotional, dramatic, political explosions, would there be as many of them? Or would we get better at sighing and scrolling past because it wouldn’t be worth our effort to drag out a pen and paper?

Communication happens much faster now—and it’s changed what we allow to be said.

A handwritten letter devotes complete attention to the person you’re writing to.

On social media, it is not uncommon for me to have several chats open at once. And while I can get a lot done in a short amount of time, I also haven’t fully given myself to any of the conversations I’m having.

You can’t be scatterbrained about who you’re writing to when you’re using a pen and paper. There’s not enough room on the kitchen table to be working on 12 letters at once. You have to focus on one person at a time—which brings with it a sort of importance and reverence for the individual that’s being written to.

A handwritten letter means a break in the day.

It might have something to do with the fact that to write a letter, it requires that you take a break from what you were doing, but I tend to think that sitting down to work on a handwritten letter is just as enjoyable for the writer as it is for the receiver. I would argue that in the days when the handwritten letter was more common, people knew how to take a break every once in awhile.

We could learn a lot from taking time for the handwritten letter. It’s more than just words on paper. It’s a break within a way to connect.

But one of the biggest changes I see that’s come along with the death of handwritten letters has to do with friendship and what we put into it. 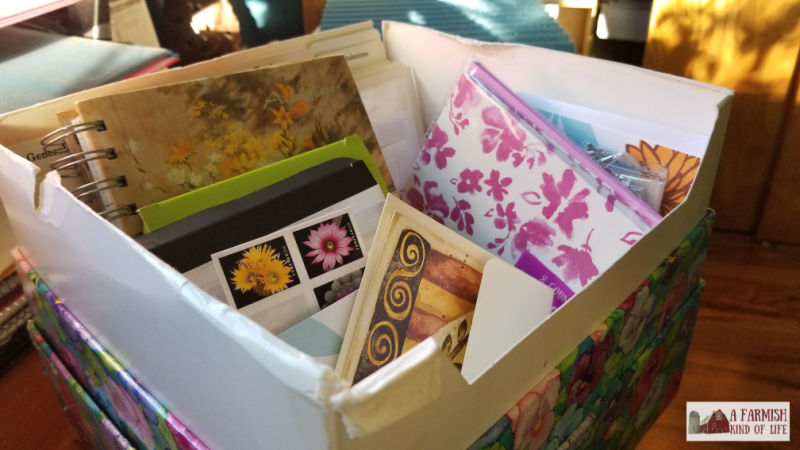 Without handwritten letters, our definition of friendship has changed.

Technology and the ease of communication online has made it easier to meet people and make friends. But it’s worth asking the question: are we making friends in numbers that makes it impossible to foster actual friendships?

Social media makes it easy to share pictures of our dinner, our kids’ dance recitals, our opinions on politics and vaccines and abortion and how the local police handled some big call. We share articles on food recalls and the price of milk. We press like and love on each other’s funny videos, we make sad faces on obituaries. We spend all this time scrolling through each other’s updates on life—but would we take the time to drop a card in the mail to any of them?

And I know that some of you are thinking, Wait, why would we do that? I’m so busy, and it’s so much quicker to send them a funny meme or GIF on social media.

One of the hard questions we need to ask is this: have we collected a lot of people in our lives whose friendships are supported simply because of the fact that we can use our smartphone to blast off a quick chat?

While part of the greatness of social media is that it has helped us to expand our world and the number of people we can communicate with, sometimes that, in and of itself, is the issue.

Y’all, we don’t really have time to communicate with all these people.

I have 841 friends on Facebook. They all come from different places in my life and different places in the world. I communicate online with them for all different reasons. Some are work-related, there are old friends from school, family members, parents of my kids’ friends—the list is long once you really dig into it.

But y’all, 841 friends. That number is twice the population of the town nearest me. I’m pretty sure if I told Ma Ingalls that I had 841 friends, she’d look me up and down ask what in the world I had time to do in a day while keeping up with that many friends.

Because in Ma Ingalls’s time, friends meant something different.

And yes, thanks to Facebook, the term “friend” can become synonymous with someone I sorta know and am connected to online.

But let’s be honest and dig into this.

How many of your social media friends do you know and talk to outside of Facebook in real life?
Includes: Family members, in real life friends, co-workers, people who volunteer for the same organization as you

How many of your social media contacts are also family/real life friends, but in person communication with them isn’t possible?
Includes: Your cousin on the opposite side of the country, your niece who is serving across seas, your son in college three states away.

How many of your social media friends are people you met on social media and you will likely never see them in real life?

How many of your social media friends would you completely lose contact with if the internet temporarily or permanently went down?

And how many of those would cause you to shrug your shoulders and just move on if online communication ceased to exist? And if so…why are you devoting so much time to scrolling through their updates?

Be honest. How many of your social media friends would you really pick up the phone to call? Or take twenty minutes to sit down and write a letter to?

The ugly question I keep circling back to is this: are we friends with more people now simply because friendship doesn’t take as much time as it used to?

It’s a different world without a handwritten letter.

I’ve spent a lot of time lately talking to folks with more life experience than I—most of them twice my age. And while we compare the old days with life today, at some point they usually sigh and declare, “it was just a different world back then. It’s hard to explain.”

It was a different world, and for many reasons that can’t be easily untangled. I am thankful for some of the advancements that technology has brought us, and that our communication has, in some ways, become easier. And I’m grateful for the many people it has allowed me to connect with. But I think we have to be careful that in our quest to make things faster, quicker, bigger, better, we don’t cheapen our communication or our friendships.

There is something about the simplistic beauty of a handwritten letter, note, or card, arriving in the mailbox. It proves that at the heart of our interactions, we just want a genuine piece of someone else’s time. We want to be paid attention to with genuine concern. We want honest communication about things that matter. We want things stated simply without so many extra, ranty, dramatic words.

But most of all, people just want to know they matter—that they’re not just friend 574 of 841.

So I encourage you to drop a handwritten letter or note or card in the mail to someone. I guarantee you it will make a difference in their day—and yours.

Share this...
Filed Under: Homesteading, Podcast
Screwing up the simple life
Why We Started Homesteading: Episode 53

1 thought on “The Handwritten Letter: 4 Reasons We Need to Bring it Back”