Home cured ham: how to brine a ham

One of the great things about raising your own pigs is having a full freezer after hog butchering is done. And while we all love homemade bacon, ham is a favorite as well. So let me share with you how we brine a ham (and then smoke it!) here at our farm.

While most people think of ham as a giant cut from the back end of a pig, you can actually make ham from any pork roast that you cut. At butcher time, we always cut several smaller pork roasts instead of two giant hams from each pig. We do this because packaging is easier, and it also allows us more flexibility in what we do with the pork roasts.

After choosing a pork roast (or several!) to make into ham, the first thing you need to do is brine the ham. Some people call this “curing” a ham — brining is a type of curing. To brine a ham is basically to wet cure a ham.

Brining takes several days, and it’s essential to the process of making a good ham. Please realize that making a ham from the pigs you have raised is not going to be an immediate thing — it’s definitely a process. Good things come to those who wait.

How to brine a ham

NOTE: This is how we brine ham at our farm, it has worked for us for many years. There are also other theories and ways to do it. Do your own research and then go make some ham. 🙂

Here’s the method we use to brine a ham. For 7 pounds of pork, we did:

2 1/2 tablespoons pink curing salt <– needs to be this, not table salt

Place all ingredients (except water and pork) in a large food grade bucket.

Bring two quarts of water to a boil and then pour over what’s in the bucket. Stir to dissolve. Then pour four quarts of cold water into the bucket. Stir until well combined. Then carefully place your pork roast(s) in the brine filled bucket.

Some people suggest turning or flipping the roast in the brine solution every day or so, but we’ve never done this.

The pork roast needs to brine one day for every two pounds of pork. In other words, a seven pound roast would need to brine at least three and a half days. This bucket of future ham needs to be refrigerated for the entire brine time. Plan accordingly!

Brine for the total weight of pork or the weight of the actual roasts?

If you are brining a bunch of smaller cuts equaling XYZ, the brine will obviously go through the cuts faster than one big roast equaling the same XYZ.

In other words, the brine will go through an 8 pound roast much slower than it will soak into four 2 pound roasts. The time your meat should sit in the brine has more to do with the individual cuts than the total weight of the meat in your bucket.

What if I’m doing a large ham?

If I were making a large ham (one big chunk, bigger than 7 lbs), I would make the brine recipe above, put the ham in the bucket, and see if the brine covers the ham. If it does, I would be good to go. If it didn’t cover the ham, I would make another batch of brine (or a half batch, depending on how much room was left) and add that to the bucket until the ham was covered.

I’d then do the math for how long it needed to sit in the brine, possibly adding a couple more days because the larger pieces can be persnickity about soaking all the way through.

In other words, a larger ham doesn’t necessarily need more brine. You just need enough brine to cover the meat in the bucket, and that will depend on the bucket/container you’re using to brine your meat.

Note: If your ham barely fits in the bucket (pressing against the sides of the bucket and needs a shoe horn to get back out) find a bigger bucket/container. Your brine will not be able to soak in if it can’t get around the meat.

Note: Larger hams can sometimes benefit from also injecting some brine into the meat, but I’ve not done super large pieces of meat yet to share my experience with this.

After brine time is done…

When the brining time is completed, you need to rinse the roast(s). Some folks rinse it in cold water for several minutes, other folks put the roasts back into a clean bucket with fresh water and let it sit overnight.

It all depends how salty you like your ham. The quicker you rinse, the saltier the ham will be. (We rinse ours for about five minutes – we like salty ham!)

After the ham has been rinsed to your liking, blot the ham dry. We actually set ours up to dry in the kitchen on drying racks with a fan. The drier the skin of your ham is, the more the smoke flavor will adhere in the next step.

The next step after you brine a ham? Smoke the ham.

We have an electric smoker (only because we don’t yet have a smokehouse) and so when our hams are ready to be smoked we put them in the smoker, turn it on, set it 225 degrees, fill the tray with wood chips, and let ‘er go.

Know this: it sometimes takes a lot longer to smoke your hams because the temperature outside is well below zero and it takes that smoker a little more work to keep up to temp. This particular 14 pounds of ham smoked for several hours at 225 degrees for the hams to reach an internal temperature of 150-160 degrees.

Even so, it was well worth the wait.

Can you “smoke” a ham if you don’t have a smoker?

You can! On a handwritten recipe card in my recipe box, I have the instructions that after you brine a ham, it should be dried, brushed with liquid smoke, and then baked at 325 for 30 minutes per pound, or until the internal temp of the ham reaches 150 degrees F. We don’t use this recipe now because we have a smoker, but it’s good to know the option is there.

There are also several articles on the Google that explain how to smoke a ham (or any meat) without a smoker—some of them are simple, others more involved. Try your luck with the Google and see what you come up with.

Or, you know, invest in a smoker.

Homegrown, home-cured ham is the best!

There’s nothing like sitting down to a plate of eggs from the coop, toast made from homemade bread, and a slab of ham from pigs that you raised yourself. It’s the best kind of meal, don’t you think? 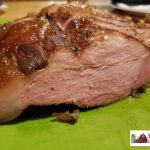 Have fresh pork you’d like to turn into ham? Here’s how to make it happen!

2. Bring TWO quarts of the water to a boil and then pour over the dry ingredients in the bucket. Stir to dissolve.

3. Then pour FOUR quarts of cold water into the bucket. Stir until well combined.

4. Carefully place your pork roast(s) in the brine filled bucket. Turn a plate upside down and place on top of pork roasts to keep them completely submerged.

5. The pork needs to brine ONE day for every TWO pounds of pork. (7 lbs of pork = 2.5 days) and needs to be refrigerated that entire time.

6. When brining is completed, you need to rinse the roast(s). You can rinse the pork in cold water for several minutes (saltier ham). Or put pork back into a clean bucket with fresh water and let it sit overnight (less salty ham).

9. Don’t have a smoker? The ham should be blotted dry, brushed with liquid smoke, and then baked at 325 for 30 minutes per pound, or until the internal temp of the ham reaches 150 degrees F.

Share this...
Filed Under: In the Kitchen, Podcast
Should You Help A Chick Hatch?
Old Fashioned Weather Prediction Tips

75 thoughts on “Home cured ham: how to brine a ham”