We raise all of the meat we consume—except for beef, which a friend raises and we exchange pork and chicken for. But what surprises some people is that we also butcher all our own meat here at the farm. Is this the next skill you’re ready to add to your self reliance and self sufficiency bag of tricks? Let’s talk about the reasons you too might want to butcher your own meat.

Butcher your own meat? Growing up, it was my normal.

While I didn’t grow up on a farm, I did grow up in a family of hunters. We usually had several deer to process every year, and people would come over and we’d have a big gathering to get the job done. I remember my sister and I standing on chairs pushed up to the table so we could reach to help with the process. It was our normal. If you wanted meat in the freezer, this is just what you did.

So after growing up, getting married, and eventually moving to a farm, it was never a question of who would do the butchering of the animals we raised. My husband (also a hunter) and I both knew how to do it, so we decided to take on the job ourselves.

For what reasons do people not want to butcher their own meat?

There are a few common reasons that people give for not wanting to butcher their own meat.

It’s a lot of work/time.

And this is absolutely true. It is time consuming and a lot of work—especially if you’re butchering a larger animal.

They don’t know how or are afraid they’re going do something wrong.

When you don’t yet have the skill set, it can certainly seem overwhelming! But a great piece of advice my husband gave me was that even if you cut in the wrong spot or separate a cut of meat “incorrectly”, the meat is going to taste the same.

Too emotional/ I can’t kill an animal I raised

Some people want to raise their own meat for a multitude of reasons, but aren’t able to complete the end of the process because they can’t wrap their head around killing something they have raised.

I also know some people who say I could butcher my chickens if I didn’t have to be the one to kill them. Once they are dead, then I could continue the process. Once the animal is dead, it’s easier to separate themselves from the process.

Too bloody, don’t want to deal with the mess.

If you butcher your own animals on site, there were certainly be a “mess” to deal with—and some people don’t deal well with that part of raising animals for meat.

7 reasons to butcher your own meat

Once our animals get to the farm—or are born on the farm—they never leave the farm. We do not have a livestock trailer here and it’s been a long time since we’ve needed to borrow one. We get our feeder pigs small enough that they actually can go in extra large dog kennels in the back of a truck. It’s a very closed system, and we don’t have the extra stressor of having to load/trailer the animals to an off site butcher.

2 – You’re going to get all the parts you want in the way that you want them.

There are some butchers out there who can cater to the specific things you want—and that’s awesome!—but it’s generally not the norm. If you’re looking to keep parts of the animal that aren’t what people usually request (organ meat, fat, bones, carcass, etc) it’s not always easy to get it back. Additionally, some folks want specific cuts or things done that aren’t what the butcher usually does, and it messes up their efficient system when they step out to fill your specific request. By butchering your own meat, you guarantee you will get what you want in the way that you want it without any specific instructions.

3 – Less expensive to butcher yourself

After the initial investment of tools, choosing to butcher your own meat at home is absolutely going to be less expensive. Time is money, and in this case if you’ve got the time to butcher, you’re definitely going to save money.

4 – You can do it on your schedule, not the locker’s schedule

One year we were going to have 8 pigs to butcher. When we realized we might not want to tackle butchering 8 pigs at our farm we started calling around to grab a spot at a locker, and they were all scheduled out so far out that it didn’t make financial sense to continue to grow out the pigs that long. By butchering at home, you control when it happens, and if your schedule needs to change, it can change.

5 – You get to see the entire process of raising your own meat, beginning to end.

If you are someone who eats meat, I think there is something very powerful about being part of the entire process. Raising meat animals on your homestead with care and good food is the beginning of the process. Butchering on the farm, in my opinion, is the culmination of that home-raised process.

6 – Another check mark in the self sufficiency/self reliance box!

Learning a new skill is always a great idea!

7 – You can help other people out.

When you know how to butcher and process your own animals, you are able to teach others to do the same. We often have people who have asked to step in on butcher day in order to watch and learn, and it’s always nice to know that they’ve left knowing a new skill they can use on their own homestead.

Are there any drawbacks to butchering your own meat?

It’s a lot of work and requires people to get it done.

It is a physical job that takes time and planning. Also, many hands make light work. If you’ve only got two hands, it makes for a really long day.

You may be at the mercy of the weather.

Depending on your set up, the weather may hinder your butchering plans. For instance, we do open air butchering for our chickens, and if it’s storming or 100 degrees, we’re definitely pushing off butcher day until the weather changes!

You have to dispose of what’s left of the animal.

If you butcher your own meat, there will be things you need to dispose of—unless you are making use of the entire animal—so you will need to have a plan in place for what to do with what’s leftover. (Hides, feathers, bones, etc.)

But, wait. Can kids help on butcher day?

Our kids are involved in butcher day and they have been since they were quite young. There are always things they can do to help, even if it’s just being a runner when one of the adults needs something (a bucket of water, a roll of paper towels, a new garbage bag).

We actually walked our oldest through butchering an entire bird when he was 8. Don’t be afraid to get your kids involved in the process. Kids 150 years ago were involved in a lot more homesteading stuff than most of us think is okay in modern times. And while we do want to keep our kids safe, it’s also important to remember that they can often handle far more hands on self-sufficiency skills than the modern world allows them to experiment with.

What’s the best way to learn how to butcher your own meat?

In person is best if you have someone available. If you have a friend or family member or someone in the community who is willing to show you the ropes of how to butcher your own meat, that’s always the best way! But since many of us don’t have that option…the internet is a Godsend.

Googling how to butcher will send you to many great how-to posts. I have written blog posts on:

How to Butcher a Chicken

How to Butcher a Pig at Home

YouTube is also great for tutorials. I haven’t made a butchering video because it requires extra work/set up that I don’t want to do on butcher day, but maybe some day in the future we will make it happen!

So those are some of my thoughts on why you might want to consider if it’s time to butcher your own meat on your homestead. It’s always nice to add another skill to your self sufficiency toolbox, and this is a big one that will not only save you money but also close the system on your homestead. There are so many sources for places to learn the how-to skill. If you’re stuck, feel free to drop me an email at [email protected]

Other links mentioned in podcast episode 67: 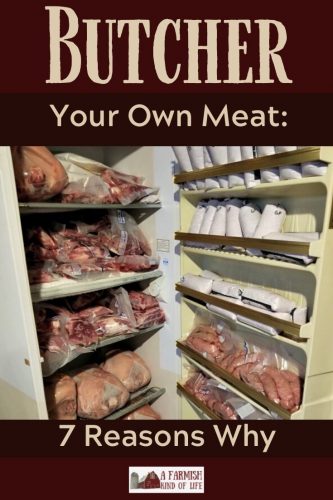 Share this...
Filed Under: Homesteading, Podcast
066: Christmas Gift Giving Challenge
068: How to Grow a Year’s Worth of Food (with Melissa K Norris)