The great thing about social media is that it gives us an opportunity to talk. Which, oddly enough, also happens to be the trouble with social media. Friends, let’s talk about how a farm(ish) girl approaches social media etiquette.

It’s a big wide world out there with lots of things going on. Occasionally my social media newsfeeds blow up with a virtual fist fight that spreads like wildfire. It’s at that point it’s time to give some farmish advice about how to behave on social media. 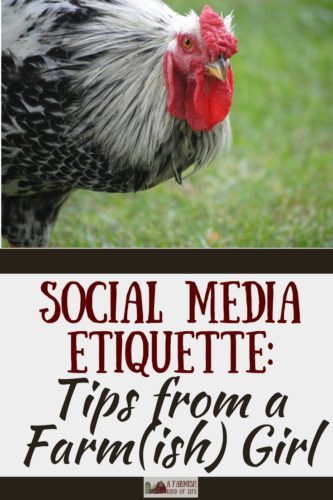 Farmgirl social media etiquette #1: If you wouldn’t say it to someone at a fried chicken dinner, don’t say it online:

I haven’t quite figured out why yet, but folks sometimes forget that the power of their words doesn’t diminish because they are typed instead of spoken to someone’s face. Social media has a sometimes magical (and sometimes downright stupid) way of making people braver than they would be if forced to say the same thing to a person in real life conversation.

I like to just imagine that I’m sitting at a big chicken dinner with y’all, and I think it could be helpful if everyone used this imagery. If you wouldn’t say it to someone who was sitting across from you at the table…maybe don’t type it out on social media. M’kay?

As a kid, I used to hear people say there are two things we don’t discuss at the table: religion and politics. There’s a reason for that—they are two topics that people have strong opinions on, and attach big parts of themselves to.

Social media didn’t catch on to that rule though; there’s a current notion that it’s everyone’s right to discuss everything all the time, and social media provides the perfect platform to do so.

I’ve talked to the animals in the barn about this and I’ve decided that as much as we’d like to say that it’s fine and dandy for all of us to have differing opinions in the big land of (as the kids say now) ‘Merica and beyond, I have to call bluff on a bug chunk of the population. If folks really were okay with people having differing opinions, they’d let whatever the current topic of argument is die down.

Great. I’ve got to go weed the garden and clean the pig barn. Let’s move on.

I live in Minnesota, land of a bazillion lakes, and I know a thing or two about fishing. The fish that end up in trouble are the ones who take the bait.

If we can get real for a second, some people on social media are baiting others into arguments. I know that post looks innocent (much like that Gulp bait I’m using to hook a fish), but it’s deadly. Bite the bait and you’ll get hooked into an argument.

Sure, you’re not going to end up as dinner on someone’s plate (like my fish), but you will get angry, stressed out, say things you don’t mean, and possibly ruin friendships.

Seriously. Spit out the bait.

He might. Or he might not. You could ask him (the person who wrote it) instead of me (the clueless one). Or you could realize that if it doesn’t specifically mention you, it’s actually not about you. 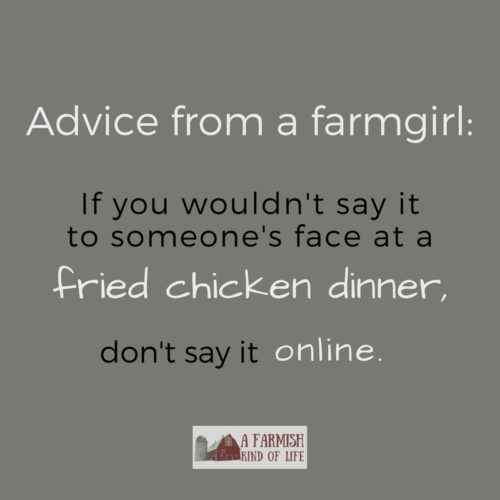 I can imagine I hear my pigs telling me they need a belly scratch just as easily as I can imagine someone’s voice speaking the post they just put on social media.

The problem is, depending on my mood, the temperature outside, what the ten posts before it said, and how much time I have, the inflection in the voice I hear will change—which could potentially alter the intended meaning of the post.

Wouldn’t it be interesting if every post was read back to us in robot voice so we didn’t place sarcasm (or whatever else is heard) where it wasn’t intended?

Zuckerberg. Get on that.

Farmgirl social media etiquette #6: Farmish folk are busy. There are seriously a million other things you could be doing:

I don’t watch the evening news. Haven’t for years. Many times when chaos scatters across my newsfeed, I have to google what’s even being talked about.

Social media can be productive and enjoyable, or it can be a destructive, emotionally-charged time suck. Can I get an amen? If you’re feeling it’s the latter, you need to change how you use it.

Listen: Opinions are like belly buttons: everyone has one, and the world gets pretty crazy if everyone is sharing theirs. When big things hit the news, it can almost feel as though there’s a sort of frenzy on social media—if I don’t post how I feel about this, people will assume they know how I feel! And they might be wrong!—and posting leads to commenting and commenting leads to arguing and arguing leads to tantrums and….

Am I saying you shouldn’t share your opinion? Nope. I’m just saying be honest about what you’re getting involved in and why.

People often share their opinion thinking they’re going to change someone else’s mind. How often does that happen?

Anyhow. If you can take a break from arguing on social media, send me your number. I’ve got chickens to butcher, and many hands makes light work.

Saying things like, “I am so done with social media! I’m leaving” is the equivalent of throwing a tantrum, picking up your toys, and stomping home. And while this kind of tantrum might be acceptable in the farmyard on a 105 degree day after you’ve been kicked by a cow, it looks pretty ridiculous on social media.

And there you have it – my farmish guide to social media etiquette. I’m headed back out to the tractor…but are there any tips I missed? Add your own in the comments.

11 thoughts on “Social Media Etiquette: Tips from a Farm(ish) Girl”