The Gift of Our Silence 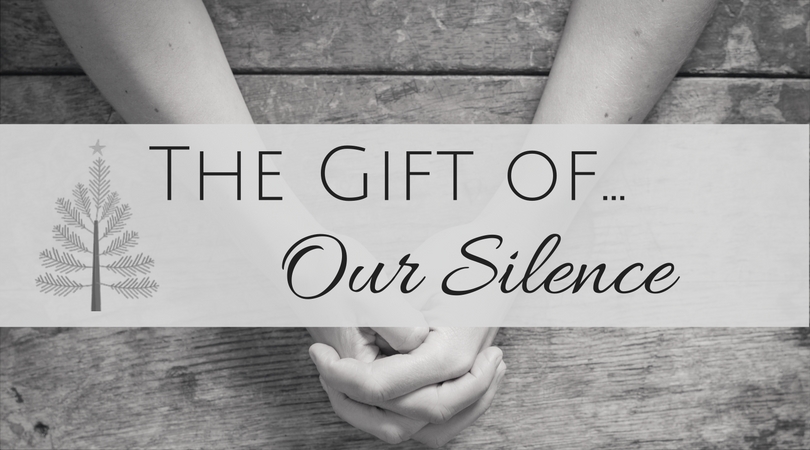 ** This post is part of a 14 day series. To read more of my “The Gift of…” posts, scroll to the bottom of this post for links.

Sometimes we don’t know what to say. Sometimes there are no words.

And sometimes our silence is a gift because it’s all we have.

I offer that maybe you’re not supposed to say anything.

The first time I wrote about this topic was the day after the Sandy Hook school shooting. A friend who lives there had texted to tell me that something was happening and asked me to pray. Hearing updates from her, as well as watching details pour out through the media, I was completely dumbfounded and horrified and absolutely without words.

I’m not sure anyone is supposed to have words after something like that.

It’s okay to not have words.

Silence—because we don’t always need to know what everyone is thinking.

We live in a world where information is right in front of our face, constantly. We get play-by-play reports; the action is relayed to us blow-by-blow. Technology somehow promoted us to thinking we’ve got some need to know right now level of clearance. We’ve become so entitled that we get angry or frustrated when we can’t know right now.

Sometimes our silence is a gift.

We latch on to whatever information we can find. Hearsay is passed around as fact, stories are reported incorrectly—which so frustrates us— and yet, we get mad at officials when they say they won’t comment on something because it’s part of an active investigation.

Sometimes our silence is a gift.

In a situation where a family should just be allowed to grieve, we publicly explode into vicious fights about gun control and where was God and this is why people should homeschool and if the Democrats/Republicans would just and school security dropped the ball and if I was there that guy never would have got near those kids and every other thing under the sun that fills up our mouths when we get angry.

We comment because somehow then we are involved. We are a part of the experience. The anger. The uprising. The sympathy.

And every syllable of every remark adds to the pounding of a headache that can’t be solved by talking.

It’s almost as if we need something to talk about.

We need to be careful in taking on anger regarding things that aren’t ours to be angry about. That doesn’t mean we don’t care about the injustices in the world. That doesn’t mean that we turn a blind eye to everything going on. But at some point anger almost becomes a thing that people latch onto to have something to do.

We’re all perpetually pissed off about something. We’re in an uproar about this or that.

And we don’t do anything about it except talk.

It seems that part of society (American, especially) has a need to be angry about something. We are always looking for something to fuel our chronic offendedness. What an absolutely wasteful, inactive way to spend a life.

We need to learn where the line is between offering actual words of comfort, support, and solidarity—and the other side of the line, which is being angry about everything because it’s the thing to do.

We need to learn how to stop talking.

We need to learn that sometimes it means more when we don’t say anything.

We need to stop buying into the belief that we must dissect every situation and offer our opinion. Because really, who are we? In the midst of tragedy, does our incessant babbling help anything? Or does it just make us feel better?

And really—does it even do that?

Does the jabbering commentary change anything? Or does it just fuel more fires that won’t ever be put out?

Maybe sometimes it’s our job to simply shut up. And before we open our mouth again, consider what the point is of what we’re about to say. What is the end goal? Because most of the zinger memes that are posted on social media really aren’t put there with the intention of helping or changing anything.

Can we own that? Can we admit that?

Sometimes our job is to be the silent shoulder to lean on and not one single thing more.

Sometimes in a world of dark, our job is to be a light that shines. Lights don’t necessarily make noise. Have you ever seen a lighthouse? Author Anne Lamott once said, lighthouses don’t go running all over an island looking for boats to save, they just stand there shining.

You don’t need to freak out and scream to change the world.

Be quiet, and shine.

You can say anything. But are you going to do anything?

We can voice our opinions on what should be done about refugees or the environment or gun control or school lunches or crime in our neighborhood.

Or we can do something.

And while a huge group of people are talking about how to do something, there is a smattering of folks who are out there working to get something done.

To put the oomph behind words they never needed to say because they were already out showing people how they were going to get it done.

And other times, there aren’t any words because we’re supposed to be using our hands and feet instead.

This post is part of a 14 day series, written across both sites that I run.

Gift #3 —The Gift of a Dog’s Friendship

Gift #7 — The Gift of Community

Gift #9 — The Gift of Perspective

Gift #12 — The Gift of Encouragement

Gift #13 — The Gift of Unanswered Prayers

Gift #14 — The Gift of Actually Listening