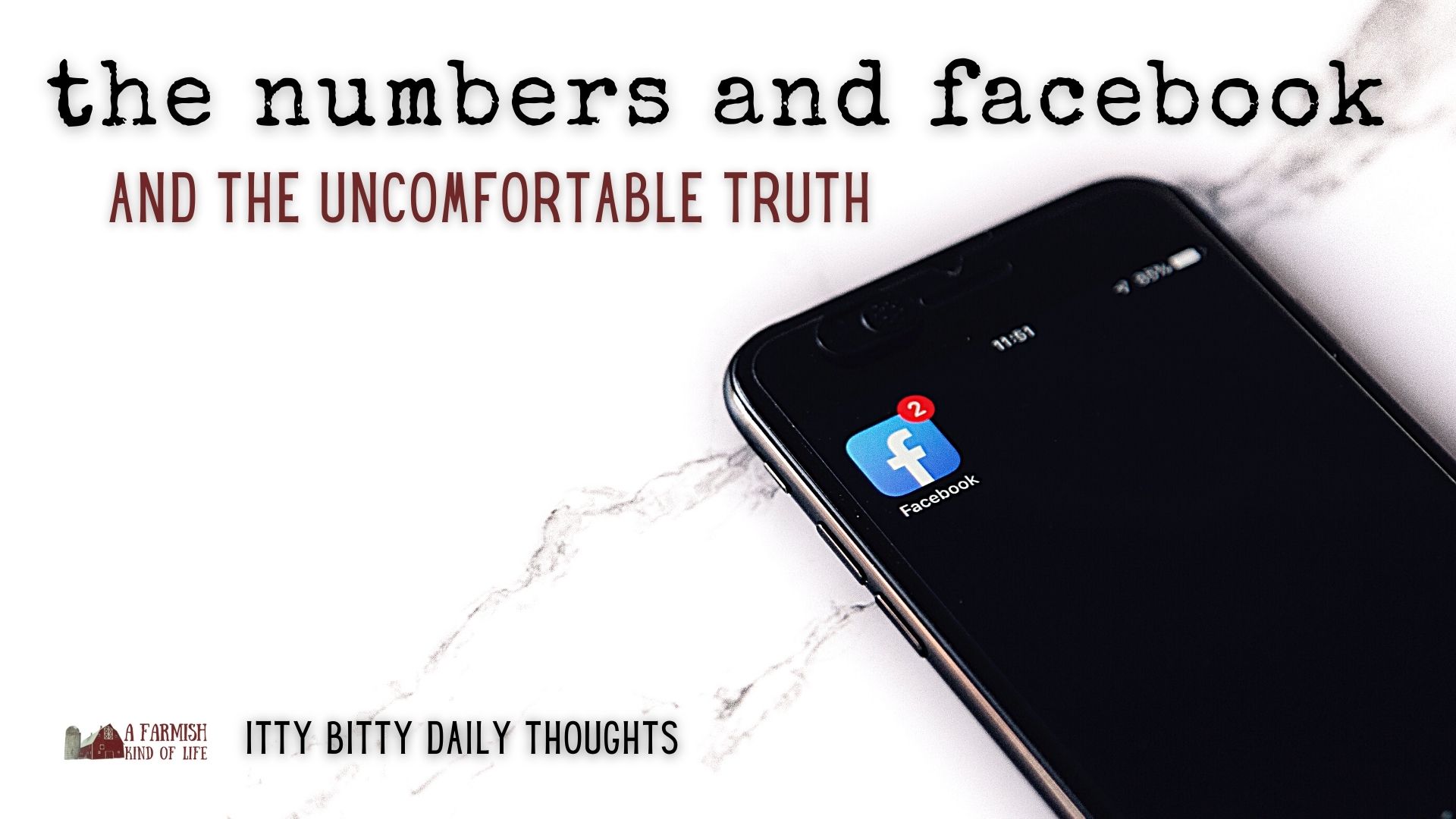 I’ve looked at the numbers, y’all, and I think it’s time to have a discussion about uncomfortable truths and the giant known as Facebook.

Note: This itty bitty thought was also touched on at the end of the yesterday’s Deep Thoughts from the Woods podcast episode, but didn’t make it into the show notes, so here goes.

Uncomfortable truth: what if, in growing your own thing (let’s say, a website), you were actually just growing something for someone else (let’s say, Facebook)?

Uncomfortable truth: what if when all of us (let’s say, bloggers/content creators) said, “let’s get on Facebook because then more people will find our stuff”, we didn’t realize we were spending more time growing the Facebook platform and giving content to Facebook to keep Facebook going than we were giving to our own stuff?

What if having 500 followers on a different social media would actually mean the same thing as having “20k” on Facebook?

If everyone who has a Facebook page for their business had to start over from scratch today on Facebook (and didn’t take part in any of the asinine like-for-like things that go around), what numbers would we end up with? Would I somehow attain 20k followers again, or would I end up with more like 750? And would there be any difference in the level of interaction on my page with “only” 750 likes?

Obviously, not everyone who likes a page is going to interact with everything that’s posted. But here are some numbers for you to look at. The most interaction I’ve ever had on a post on my Farmish Kind of Life Facebook page was just over 1100 reactions and 102 comments. It was a picture of my favorite rooster that I’d found dead.

You can’t tell me that for the last couple years of being around 20k followers, that the most popular post—and we are talking most popular by far—was only interacted with by 5 percent of the people who said my page was interesting to them?

And that most of the time, a really powerful post on my page is interacted with by 1.5% of my followers?

And I know there is the, “well, that’s 1000 people who wouldn’t have seen your stuff  ‘any other way’” and that’s the argument for staying on Facebook.

Two suggestions for you today:

If you have a business page on Facebook, dig into your stats and see how it’s actually working for you. I’ve had many people tell me they wouldn’t dream of leaving Facebook because what would I do without my (for instance) 20k followers?

Friends, it doesn’t matter how many followers you have if most of them aren’t seeing or interacting with what you’re tossin’ out there.

If you have Netflix**, check out the documentary The Social Dilemma. It’s 90 minutes of the people who helped create social media basically sounding the alarm on social media. It’s a deep dive into the psychology behind social media (namely Facebook), and you probably won’t like how you feel when you come back up for air.

**Note: I know that some of y’all are anti-Netflix because of a certain show that’s on it right now, and that’s absolutely your choice to do. My thoughts on the whole Netflix debacle are a whole different itty bitty thought for another day. Carry on.

I’d love to hear your thoughts on social media in the comments. Also, are we ready to go back to old school blogging yet?

38 thoughts on “the numbers and facebook (itty bitty thoughts)”