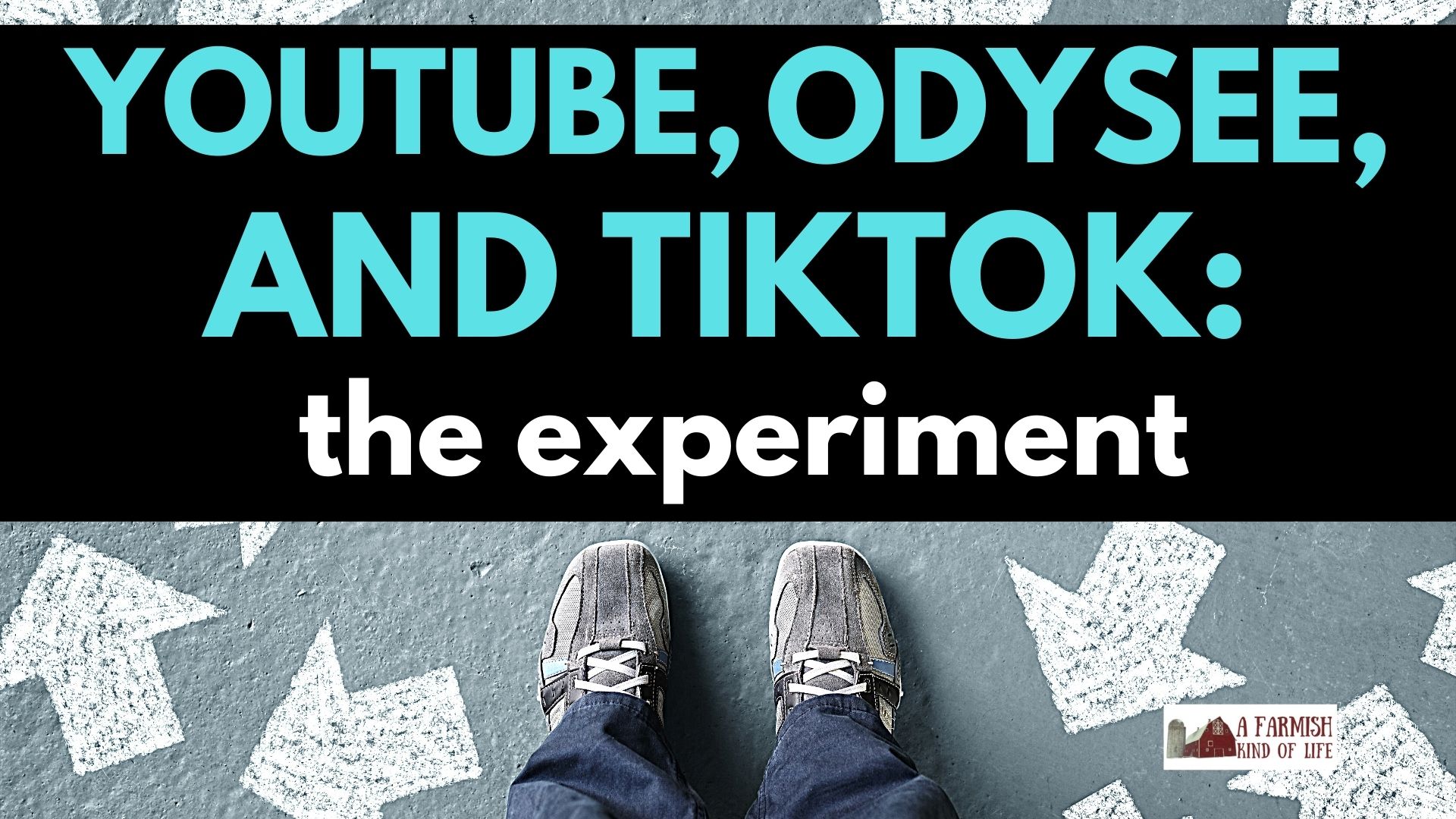 I mentioned back in the intro of episode 136 (published 4/19/21) that I was going to do an experiment with YouTube, Odysee, and TikTok. It stemmed from the fact that after a 6 month absence from YouTube, I discovered there had been a change to YouTube’s terms of service and they would now put ads on anyone’s video that they wanted to, whether that channel had reached the monetization threshold or not. I am not monetized on YouTube and so I was surprised when I checked a few things on old videos of mine and discovered there were ads playing.

I got frustrated, but after talking with a few friends (who also have YouTube accounts, some monetized, some not) I decided to give it a month until I decided what to do about my future on YouTube. And with that month, I’d see what was happening on two other video platforms and how they compared.

NOTES: I’ve been on YouTube since 2015, although not active the whole time. I did not start uploading videos with the intent that YouTube would be a main platform for me, it would be more for fun.

To be monetized on YouTube (meaning, receive income from the ads they’re placing on your videos) you have to have 1000 subscribers and 4000 watch hours in the last 365 days. This means that longer form videos do much better on YouTube (towards that goal).

During this experiment, I did 12 videos for YouTube, the majority of them were 2-6 minutes long. A YouTube video takes me hours to create, from filming to editing to upload time.

CONS: Terms of service/community guidelines can be vague, you can be shutdown if they don’t like what you post, flooded with accounts/YouTubers so it can be hard to be seen. Additionally, (specific to me) YouTube videos of a certain quality can take a lot of time to make.

Day one of experiment: 24 subscribers

NOTES: I only recently joined Odysee and was glad to be able to have my YouTube channel synced there, which means when I upload something to YouTube, it automatically uploads to Odysee as well.

I added 13 videos to my Odysee account during this experiment; 1 was specifically made for Odysee, the other 12 were synced over from YouTube.

PROS: A new platform that you can earn cryptocurrency on for watching videos or doing various other things on their platform. Less rules than YouTube. A smaller pool of people means you will discover videos that simply get lost in the noise on YouTube.

CONS: Can be glitchy. Not everything you want to watch is there. It can be hard to convince people to try a new video platform. If people are only auto-posting to Odysee (from YouTube) instead of interacting there, it’s hard to build an actually community/channel there.

Day one of experiment: 0 subscribers (I started a new Tiktok account for this experiment.)

NOTES: TikTok is meant for short form videos, one minute long or less.

During the time of this experiment, I did 31 videos that I shot, edited, and uploaded right from my phone; most of them were 15-30 seconds long.

PROS: Super short form videos are fast to make. If you have a message and can make it brief, TikTok can get it out there. Your videos can go far, fast. With 50 subs the first day I was getting almost 1k views on my content. How does THAT work when I have 1500 subs on YouTube and generally get 200-300 views on a video after WEEKS of that video being out?

CONS: Your videos can go far, fast… to the wrong people. The community can be mean/condescending/harsh. 8 days into being on TikTok with my farmishlife account, I had a video about “country living” go viral (it’s currently at 143k views) but it somehow ended up being taken as “husband bashing” and I’m still getting nasty comments on the video.

When I went off about YouTube adding ads to any creators’ videos, I think it was mostly because as a creator on YouTube you’re all trying to get to that monetization point. And you’re trying all these tricks and tips to get those 4000 hours in 12 months so you can finally get ads and make a little money for all the content you’ve put on YouTube. So then when it was, “we’re just gonna put ads here anyway” it sorta seemed like a kick in the teeth.

But I realized that’s mostly because it was a change from how they had operated. If they had started out operating that way, I doubt most people would have had an issue.

Because here’s the thing.

As one of many examples in the content creation world, you can have a free website/blog. If you decide to build that website on something like the free version of WordPress.com, WordPress will stick ads on your site that you don’t see any revenue from and you have no control over that. However, if you are self-hosted (which means you pay money for your site to be hosted) on WordPress. org, WordPress will not put ads on your site. If you self-host and you have ads on your site, it’s because you’ve allowed them there and you’re getting revenue from those ads. (For more of an explanation about the difference between free WordPress.com and self hosted WordPress. org, go here.)

I self-host my site. It costs me money to run my site. There are ads on my site because I’ve allowed them there. I get the revenue that comes in from those ads.

However, I have heard many many people complain that YouTube has sooooo many ads now. I’ve also had people tell me they’ve sat and watched the ads because they assumed it was helping the content creator, and now they’re frustrated because they’ve been watching ads that generated income that wasn’t even going to the content creator.

Other folks have said none of this ad stuff matters in the least because everyone uses ad blockers now so they aren’t even seeing the ads in the first place. Another friend said she thinks YouTube is is upping the ads in hopes they will push people to the Premium YouTube that’s ad-free, and costs $11.99 a month after the trial period.

There are really two ways to look at this. 1) YouTube is a free platform for people to put their content on. You don’t pay anything to upload your videos and build a following there. And a lot of people have built huge followings there. But also, on the flip side, 2) YouTube is what it is and has become what it has become because people upload videos there.

YouTube and TikTok are free platforms, which means you will always be a little bit at the mercy of their mind-changing and their rules. On Odysee, you can earn cryptocurrency by doing various things on their platform. It costs you a small portion of that cryptocurrency to then upload a video yourself (even if it’s being synced from YouTube).

I’ve had a few people tell me, “I’m so glad you’re on Odysee now because I hate YouTube and I don’t give them my time. I don’t go to YouTube anymore.” And then I will see that same person posting a whole lot of YouTube links because it just happened to have the video with the information they wanted to share. So, basically, sometimes people are “do as I say, not as I do.”

So what am I going to do now?

I’ll keep posting on all three platforms for the time being. They all serve different purposes for me with their own set of pros and cons.

I enjoy TikTok because it’s short and fast (which matches my attention span and the time I have available) and it seems like the most bang for your buck.

YouTube is still a great (free) platform with some redeeming qualities, I just have to be serious about the amount of time it takes to upload quality, consistent content.

And I’m always game to participate in and promote smaller, newer platforms like Odysee. New platform can bring changes to and solutions for the bigger tech options.

The bottom line is it’s good to have options—and options are what we have.

Share this...
Filed Under: Lifestyle Design, Podcast
147: But what’s your actual goal?
149: The Importance of Unlearning