Have you heard about the concept of being a gray man? As originally explained to me, “being a gray man” was for a SHTF situation. A gray man is the prepper who doesn’t go around telling everyone how much ammo and food they have stored. It’s the person who has the gear and knows how to use it, but they don’t go out dressed like Mr. (Or Ms.) Tacticool. Being a gray man is about blending into your surroundings. It’s basically, I am confident that I know my stuff, but I’m not going to flaunt that I know my stuff, because in a SHTF situation, that could make me a target.

Listen to the podcast by pressing the play button on the black bar above.

All episodes are linked under the podcast tab that you can find way at the top of this post in my menu bar.

The concept of being a gray man certainly applies to homesteading and prepping; but I’m starting to think it can apply to some of the other stuff going on in the world today—socially and politically. I hope this is something you will do a little thinking about and perhaps apply it to your life as we head into the second half of 2020.

The way I see it, America is sitting on a powder keg right now. And I think we have to have a conversation about the fact that your right to say what you think about what you’re doing or where you stand on some issue doesn’t need to be some ego fueled messy tirade that’s gonna get you in trouble.

Let’s say that as a homesteader/prepper, you have a certain amount of water, food, ammo, and seeds stored. And let’s say that you talk about those things as a way to teach people and help them be better prepared.

But talking about those things as a way to prove yourself as worthy or better prepared or look at how great I am is totally and completely different.

And outspoken obnoxious jerks can be targets.

When you get down to it, the gray ones are the well prepared, but quiet ones. They’re feisty, but you might not know it. They’re ready to act when needed, but they don’t get involved with the circus.

In other words, don’t just jump on the bandwagon and get angry. It means keep your ego in check. It doesn’t mean just sit back and let things happen. It means pay attention and get involved at the right time.

I’ve always liked the concept of “it’s the quiet ones you have to watch out for.” What does this look like? A couple days ago, I was working in my cute little zen herb garden, and I appeared to be a pretty quiet little farmgirl. But in my ears, I was listening to a pretty harsh, straight to the point, no BS book about using violence as a tool in self-defense against asocial behavior.

Sweet little farmgirl, y’all. Watch out for the quiet ones.

When I talk to people about gray man stuff, I find there can be a lot of ego involved. And ego is such a gross word, right? Nobody wants to admit they do anything because of ego. But a common response to gray man tactics is “but it’s my right to…” or “I’m proud of what I’ve created here (or what I believe) and people need to know where I stand…”

Ask yourself why it is important that everyone knows what you believe. How much food you have stored. What your political beliefs are. Ask how people knowing all of that moves the needle FOR YOU.

Especially when we are talking about strangers on the internet, or people you’re never going to see again.

Let’s give them something to talk about…or not

Talking about the importance of prepping and giving tips about it doesn’t mean publishing an itemized list of everything you have saved on your property. What good does it do YOU for everyone to know what YOU have?

We can compare this to the Great Toilet Paper Shortage of 2020. When Covid-19 hit, and people got scared that the supply chain would break, they panic bought all the toilet paper. And then we had some people posting on social media, bragging to all their friends about how they had ordered cases of toilet paper or cases of hand sanitizer or whatever they thought they needed.

And all I could think was, “Y’all, why are you telling people that?” Because now people knew where the TP and the hand sanitizer was. And if and when their “buddies” really needed TP or hand sanitizer, they now knew where to get it. And if the person hoarding the TP and sanitizer isn’t going to willingly share with those who need it, and the person who needs it is a little off and angry and desperate… 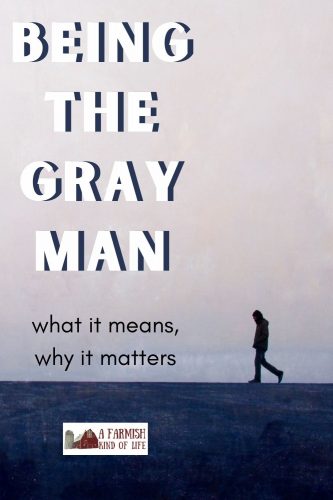 Hey, maybe don’t talk about all the things all the time applies to so much stuff. Not just what you have (toilet paper, hand sanitizer, flour, or yeast), but what you believe. What your stance is on certain issues. Where you fall politically.

And I am NOT at all saying shut your mouth and never give your opinion, but there is and always has been a time and place and there should always be an intention behind what you’re sharing.

It’s angry out there, folks.

I don’t know if you’ve been out in public lately, but the world is angry out there. And it’s coming out in ways that we’re not used to seeing in a “normal” setting. Tension is HIGH, especially the closer you get to the metro areas, the cities, the areas of higher population.

You might have your head on straight, and I hope you do. But not everyone does. Not everyone operates the way you do. And stuff you think won’t happen, is totally happening right now. So take care of yourself. When people get angry and don’t feel like they can figure out the answers or don’t feel like people are listening to them, they do things that are out of the scope of “normal”.

Again, ask yourself WHY you want someone to know what you know or what you have or what you think. Is it to benefit them in any way? Does it move the needle forward for YOU in any way?

And this is not a sit down, shut up and let “the other side” take over. That’s not at all what this is, and my guess is if that’s your immediate response, I invite you to check your ego. (Don’t worry. I’ve had to do it, too.)

Sometimes the bigger guy is the one who walks away from the fight where everyone’s chest is puffed out. And those “fights” look like a lot of different things. But when you feel the need to open your mouth about XYZ, ask yourself if it’s fueled by ego and if it’s going to move the needle for you in any way shape or form.

Your answer will tell you the best way to proceed.

Clearly, you have to decide what’s okay for you and what’s too much. I have friends who have said they’re no longer posting anything on social media but funny, random memes. And you guys, these are some of the most hardcore, fight for freedom, liberty minded people I know. They realize they can be prepping and defending and doing all the things underground, and they don’t have to journal their experience for the entire public to know. They’ve got friends they talk to, they know who they can trust, but for the general Tom, Dick, and Harry, they give funny memes. Because it makes no difference to my friends how hardcore the general public thinks they are.

That’s being a gray man.

Friends, pay attention to what’s going on. And don’t go out of your way to make yourself a target.

It’s time to understand the power in “it’s the quiet ones you have to watch out for”.

When Violence is the Answer by Tim Larkin

Signup for my email newsletter: http://www.subscribepage.com/q6n3t5

Share this...
Filed Under: Homesteading, Podcast
98: You Can Be Both
100: Safety Tips for the Homestead and Beyond