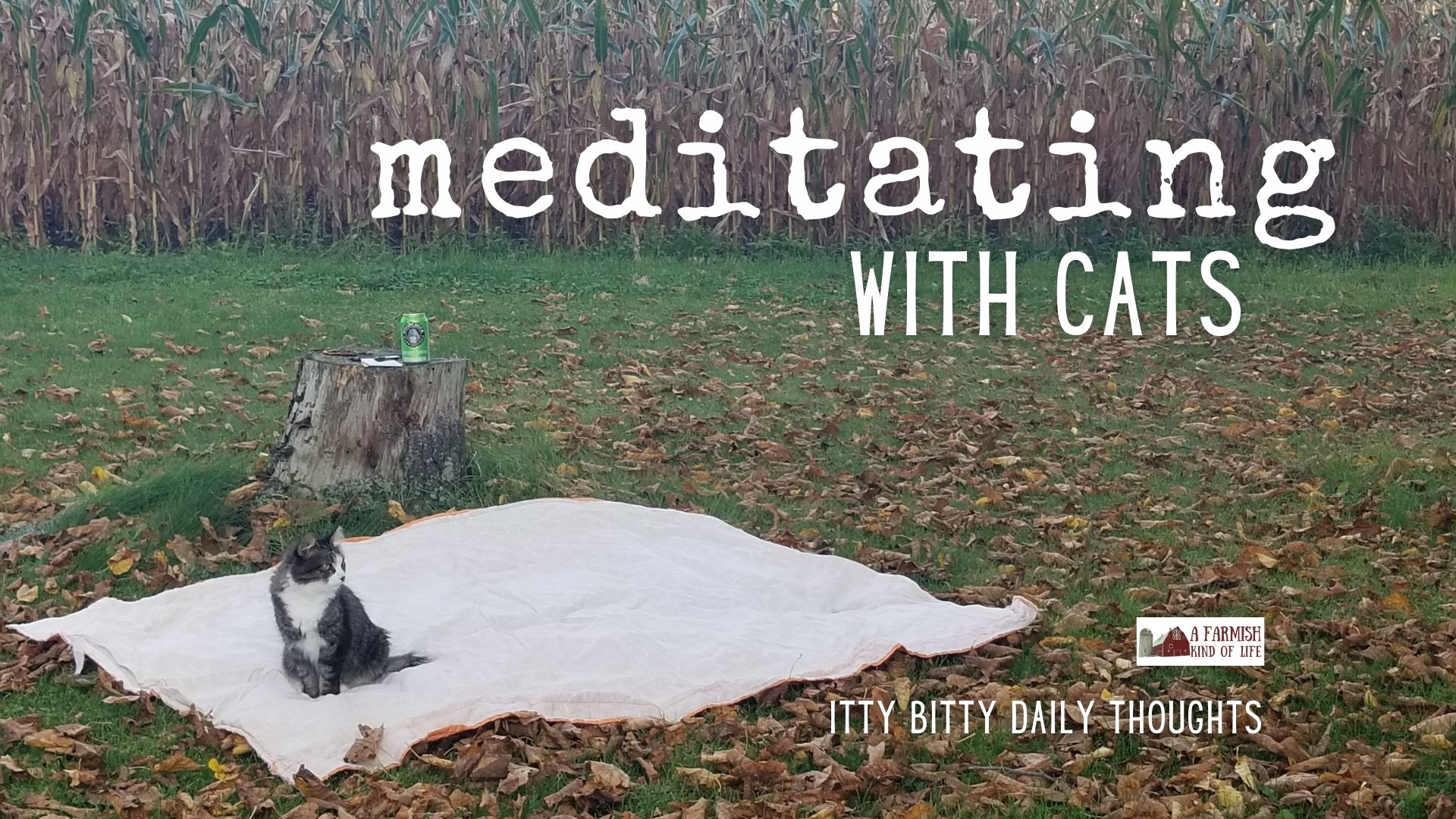 Fall is my favorite time of year.

A couple days ago I was having a stressful day. I know the cure for all things stressful is time in nature so I grabbed a blanket, a notebook, and a hard cider I found in the garage fridge (because fall, right?) and I trotted out to a favorite space in the yard.

Then I realized that music would make this even better so I went back in the house to get my earbuds. When I came back, I found:

I should have known it wouldn’t be long until one of the barn cats showed up.

Poofy Kitty, as she is known, claimed a spot on the blanket and curled up for a nap.

So happy I could bring this blanket out for you, I said.

I settled onto the blanket, put my earbuds in my ears, found some “relaxing music”, and closed my eyes.

It didn’t take long to realize that I could hear the sounds of my windchimes over the music I’d chosen. Duh, Mother Nature provides her own music, Amy.

But then I realized I could hear another noise.

I informed Ranger that he was far too young for hard cider and to leave it alone. He hopped off the stump and paced around the blanket.

It was then I realized that Baby Emily had also joined the Blanket Tribe.

I decided it was time to lay back (on the blanket I had brought out for me) and think over the day.

The backlash from the announcement that I’m leaving Facebook and the people who have told me that old school blogging doesn’t work.

The realization that I’ve got to start canning all the tomatoes I’ve been popping into the freezer because we are butchering pigs in a month.

The ugly anger that has me dropping my damn jaw every single day because I can’t b-e-l-i-e-v-e some of the stuff I’m hearing about. Is this real life?

We need stuff and I don’t like the numbers in the bank account. But we’re creative, so there’s that.

I want to make caramel rolls.

Is this real life. I mean, seriously?

I think I want to change the world, like I’m a damn warrior.

And I also want to just run and hide in the woods.

Is this real life?

I don’t know how long I laid there. And I admit, I might have dozed off. Regardless, when I opened my eyes, I realized the Blanket Tribe had grown a lot, as shown in this 8 second video below:

As it turns out, attempting to meditate and chill out and destress with cats in the general vicinity is pretty hilarious…and also pretty awesome.

As it turns out, cats know when you need them. And you always need them more than they need you.

Bookmark ITTY BITTY THOUGHTS and come back to check out what I post tomorrow! I’d love your thoughts on today’s post in a comment below or via email at [email protected]