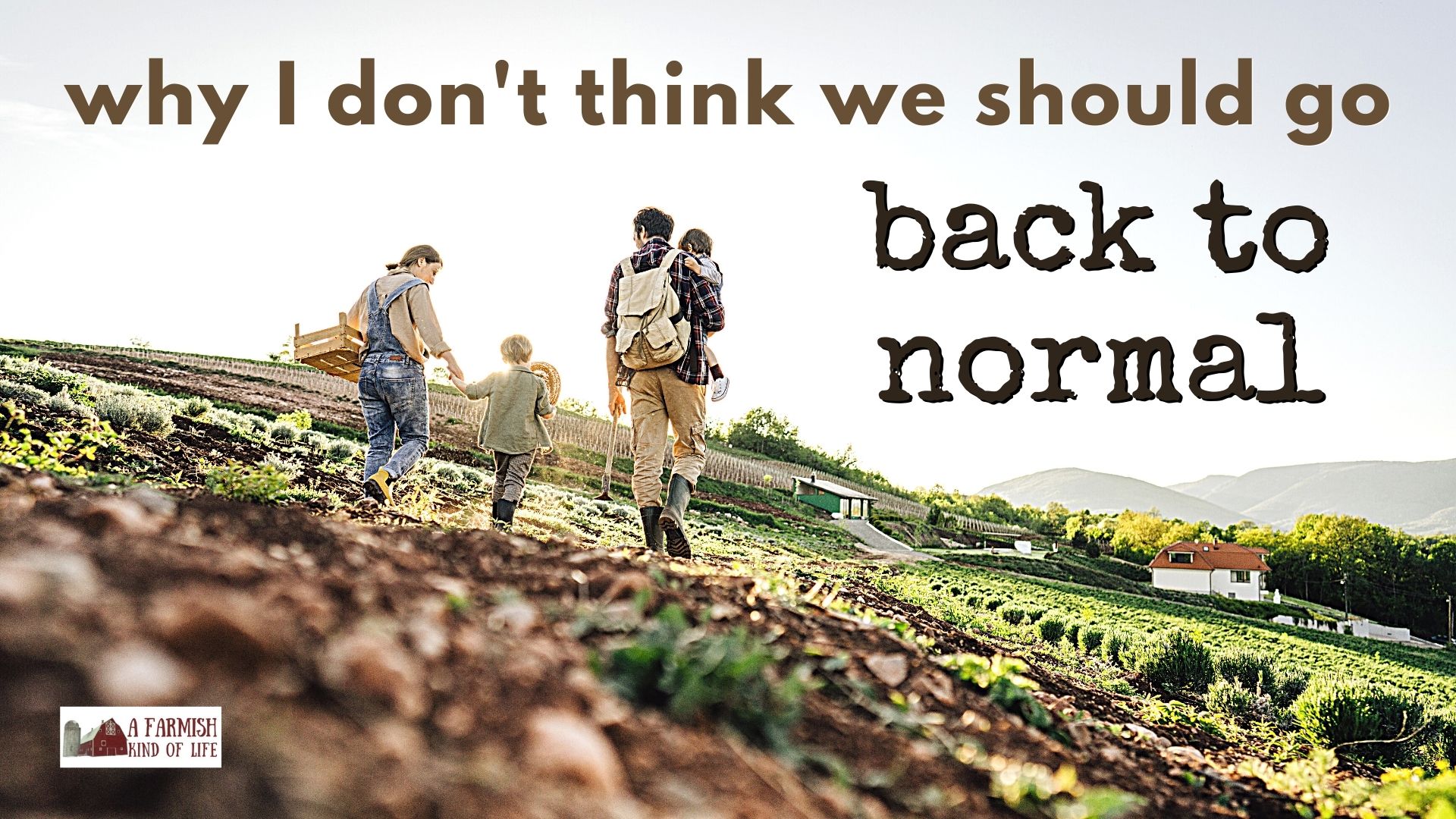 In conversations about the state of the world, I often hear people say something like, when things go back to normal…

I wanted to dig into that a bit, so I posted a video on YouTube, Odysee and Tiktok that asked about this concept of “getting back to normal” and whether or not those who were watching thought we’d ever “go back to normal”.

I got a lot of different answers.

One type of those answers could be summarized as “what is normal?” Many people said things like, normal doesn’t exist or every day is different so normal doesn’t mean anything or you’re not the same person you were yesterday — that whole line of thinking. And I get it, and we could go down that rabbit hole, but I don’t think that heady, deep thinking is what most people are getting at when they’re lamenting about “getting back to normal.”

So, why do people say it? I think there are three reasons.

Secondly, we also want to be able to find ammo and toilet paper and canning lids. We want the price of gas to go down. We want to be able to think about the holidays without wondering if our aunt or grandpa is going to require proof of having been fully vaccinated in order to eat turkey and mashed potatoes with them.

So, do I think we will go back to normal?

I don’t think we will go back to normal. Here’s why:

We’ve seen too much.

And once you see stuff, you can’t unsee it.

You can choose to ignore it (and some people have) but you can’t unsee it.

So, no. I don’t think we will go back to normal. But here’s why I think that’s okay.

A lot of people will say that “society is collapsing” or “the world is going to hell.”

But is it… really?

Because how many people are looking at what’s happening right now and thinking, “uh, I gotta get my butt in gear” or “I gotta make some changes” and they are figuring stuff out. They are making big changes in their life that make a huge positive difference. I’m not at all saying those changes are easy. Some of those changes are a huge struggle and an absolute pain in the ass inconvenience, but you’re much better off on the other side of having made them.

The idea of and your opinion about “society collapsing” or “the world going to hell” depends on your perspective, really.

I think there are a lot of parts of our world and our society that were barely held together by masking tape and bobby pins. And all you need is a little itty bitty wind to blow or someone to accidentally brush against it, and the whole thing falls apart.

But… something is getting stronger.

If you’re a homesteader, how many people in the three months, six months, 12 months have asked you about how to get started with homesteading?

How many of you are here at A Farmish Kind of Life because you took a look at the world and said, uh, what? And you decided you needed to start looking into being more self-sufficient and self-reliant? And you happened to find my podcast or an article I wrote about something and now you’re binging everything I’ve written or recorded or videoed because you just can’t get enough information about chickens or pigs or cooking or prepping or whatever.

And I think that’s fabulous and absolutely what people should be doing.

Why we need a “better normal”

So is society collapsing? Is the world going to hell? Are we ever going to go back to normal?

I don’t think we’re going “back to normal”. And I hate the phrase “new normal”. So I will say that my hope is for a “better normal”, and I think the way we grow that is by learning to rely on each other and not on Them. (Them with a capital T.) And Them can be the government, the big food systems, the public education system, whatever you want to stick there. Start relying on people who have a face and a name you know—and not because you heard about them on mainstream media. More because you can sit down and have a coffee with them.

Do I want to go back to a world where the majority of people didn’t realize how dependent we are on truckers to bring the food to the grocery store? Where people stand in front of the shelves with a dumbfounded look on their face because they’ve never thought past the fact that it’s on the shelf, or that they can choose from 8 different brands of olive oil that are never sold out?

Do I want to go back to, I don’t know the people in my community because I’ve just got my head down, plowing through what I’m doing all by myself?

Do I want to go back to not saving the liver and heart when we butcher our pigs because, meh, it’s fine. I don’t really need it.

Do I want to go back to eating food that I shouldn’t be eating as often as I do?

Do I want to go back to completely ignoring my own crap I have to deal with?

Do I want to go back to A Farmish Kind of Life floating along and just kind of existing? Y’all over the last couple weeks, there are so many things in the works behind the scenes and now that myself and others are working on them, I’m kicking myself thinking, why wasn’t I doing this before?

I don’t want to go back.

There is growth in discomfort.

Part of the reason that some people are wringing their hands and pulling out their hair and talking about the world collapsing right into the bowels of hell is that they’ve been made very, very uncomfortable. That happens when big changes are necessary. We’re forced to think about big shifts in our lives. We’re forced to have tough conversations. We have to get off the metaphorical couch, put the cheetos away, stare discomfort in the face and ask, okay, where do we go from here? And then actually do something about it.

Some of what we are seeing right now—the anxiety, apathy, anger, depression—is people working through that discomfort. And they have to work through it. We’ve all been there. Some big change happens and we’re like WTF? Last year, I did a podcast/article called “When You Just Want to Sit in Your Barn and Drink Beer: Dealing with People during the Pandemic” and we’ve all been there. But, you either have that beer in the barn and vent to friends and maybe act like an ass and then pick yourself up and move forward, or you get stuck in the beer and the venting and acting like an ass.

And which of those options you ultimately choose is completely up to you—and totally your responsibility.

Since this supposed “collapse of society”, the community building that has happened both in person (just in my own life) and online (as a part of Farmish) has absolutely and completely floored me. And some of it is new, made up of folks who are new to this lifestyle and knowledge, but some of it was there before and we just didn’t make the connection we needed to really get it going.

Once you focus on building that community, supporting other people’s interests, answering their questions, teaching them what you know and being willing to learn from them, it’s amazing what kind of things will happen. You build a strong world that isn’t held together with bobby pins and masking tape. It’s more like two five gallon buckets that are stuck together and you can’t get them apart.

I think some of us have to ask ourselves: why wasn’t that the normal before?

So is society collapsing? I don’t know. But if it is, take a look at what’s still there when the dust settles. It might be a better normal than the one some people are trying to get back to.

Share this...
Filed Under: Lifestyle Design, Podcast
170: Know Your Neighbors
172: This is Not About “Them”